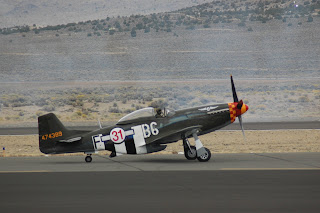 People are often surprised to hear that I am such a Reno fan. When I see their squinty stares, I always get the impression they suspect me of just humoring Mr. T’s airplane obsession. However, as T can tell you, I get excited for the next races by the time the Unlimited Gold final is called. I just can’t help it.

Five years ago (I know, forever!) when T took me to Reno for the first time, I was blown away. It had the same liveliness, people watching and FOOD as the State Fair (another perennial fav) but combined those elements with the most beautiful ma 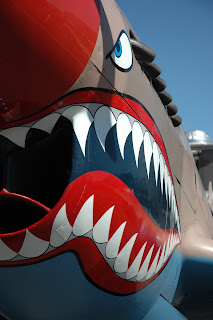 chines I’ve ever seen. From the moment I walked through the gates at Stead Field, I fell in love with warbirds: Vintage airplanes with colorful paint schemes, detailed (and often naughty) nose art, and engines that produce a visceral response with their growling.

Beyond the aesthetics, I appreciate the dedication and passion of the racers. These are (mostly) fellas who’ve spent their lives in aviation in one form or another. They eat, sleep and breathe airplanes and put their lives on the line to race. While I do see the crazy there (people do seem to die with frightening regularity), they are a testimony to the great imagination of the human race.

In addition to that passion, I marvel at the history. Flying above us and parked all around are actual fighter planes. Planes that helped win wars. Planes that were shot down. Planes whose pilots are long since dead, but serve to remind us that there are reasons we are free. When I see a P-51 Mustang or a Bearcat fly overhead, I am filled with respect for those who died and continue to die to protect me.

Of course, I also love the races because they are endless entertainment. Beyond living among the masses for a couple days every year (okay, I admit I often say “rabble”), where else can you see peo 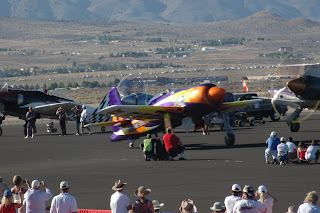 ple hurling themselves around at 400-500 miles per hour? Where else do grown ups cheer and scream for inanimate objects with such wild names as Rare Bear (woowoo!), Strega, Voodoo, Dreadnaught and the like? The spectacle is quite exhilarating and I can’t help but find myself excited for next year already!

One Response to "Ode to the Reno Air Races"