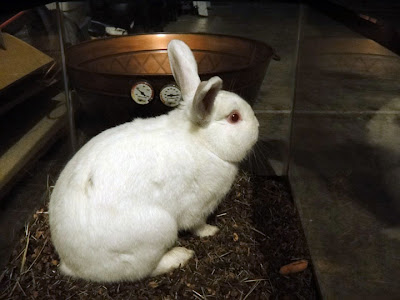 Last Thursday Mr. T was taking out the trash when he beckoned me outside, saying “There’s something you need to see.” When he offered me his arm, I was immediately suspicious thinking what scary thing are you going to throw me into??

We walked out of the garage and there was a pristine albino bunny. Straight from a Cadbury commercial, this bunny was the incarnation of Easter, sitting in the moonlight like he was king of the neighborhood. I squealed. I might have jumped. And then I wondered. What the hell were we going to do with it?

Although distinctly suburban, our neighborhood is a veritable wild kingdom. There are turkeys, skunks, raccoons, pheasant, quail, squirrels and historically, some kind of weird shrieking bird species that has since moved along. Neighbors also warn of mountain lions, coyotes and other more menacing creatures. In my heart, I knew this rabbit would never survive out there! So we plied it with carrots and T tried to catch it.

I’m actually terrified of rabbit claws due to childhood trauma stemming from my parent’s rabbit-raising and a certain lop-ear of my acquaintance, and so T was on his own. I sat by. I tried to pet it and calm it down. But in the end, T chased Mr. Bunny into several of our neighbor’s yards before finally losing him into some bushes. (My favorite part was seeing Mr. B hippity-hop down the road. They actually hop, people!)

By this time, there were several neighbors helping and we had a neighborhood bunny watch in the middle of the road, each of us lamenting its fate. I went to bed a little wistful… how would that bunny survive?? 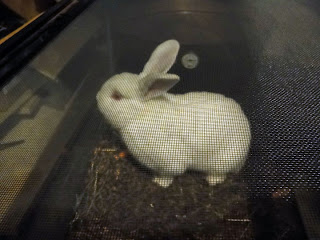 Well, that bugger is resourceful because 24 hours later, we found him! Mr. T was much more relentless in his rabbit-catching ways, and we found ourselves with a second fluffy white animal in our care. Mr. B took up residence in my tortoise’s old terrarium and we gave him carrots, lettuce and peppers for a feast. Yet again, what to do?

Feeling uncharacteristically charitable, I made “Lost Bunny?” signs and posted them around the neighborhood. In the rain. For a couple hours. In the RAIN. Happily my work paid off and Mr. B’s owner called. She said “Oh just put him in your front yard and he’ll find his way home.”

She replied back with hostility, “And, why exactly?”

I offered to drop Mr. B off at her house but she refused. She huffed. She puffed. When it was clear, I wasn’t going to dump the bunny, she said “Fine, I’ll be over there in 30 minutes.”

I called Mr. T, quite upset. What happened if she was an awful person?? I didn’t want to give the bunny back to someone who wouldn’t take responsibility! People need to take care of their pets, right?? T didn’t help the matter by telling me, “You know, she’s just going to show up, drop the bunny in the front yard and then drive off just to spite you.” Grrrrr.

Luckily, when Ms. Grumpypants did show up, she was actually very nice. She had a cage for “Bun-Boy” with his favorite brand of granola and apples. He let her pick him up and then were off, her promising to keep a better latch on the gate.

Reflecting on the experience, I’ve asked myself why did I care so much? There are lots of creatures out there that I don’t break for and rabbits are just rodents with better coats. What was so special about Mr. B? I don’t know exactly but I’m sure it has something to do with him being an innocent, pure white, obviously well cared for pet lost in the “wildness” of greenback woods. But more than that, I didn’t conceptualize Ms. Grumpypants as his owner. I thought for SURE there was some sad child out there crying for his lost friend and I really, really, really wanted to find him. While I’m happy the bunny is back at home, I’m somehow let down that home is with an ungrateful old lady. Hrm. I suppose I need to get over it and just be glad that we found her and are not the owners of said stinky rabbit!

One Response to "Following the white rabbit (and then catching it)"