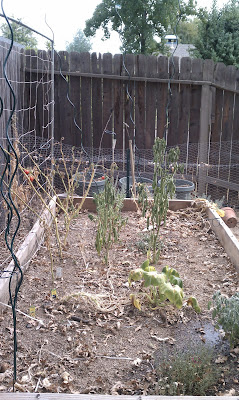 After the stunning success of the first-ever Project Green Thumbs in 2009, I am chagrined but not surprised by the pathetic crops of 2010. Note to self: Gardening, like many other facets of life, is definitely a “you get out what you put in” type of deal. And when you ignore your garden or half-ass it, bumper crops are definitely not heading your way.

I can point to several structural issues that contributed to the sad state of my garden. First, weather. My little plot is shaded by a stupid oak tree for much of the day and gets just about five hours of full sun. It’s enough to keep life sustained so long as it’s hot. And other than our wedding weekend (thanks mother nature), Sacramento stayed surprisingly temperate for most of the summer. It rained in July and August if I’m not mistaken, and my damn tomatoes just would not turn red! My basil stayed small and meek. And don’t get me started on the cucs that would not complete. The only things that seemed to be supremely happy were the green beans and the sage.

A second factor was water, or lack thereof. Although I planned to set up the drip irrigation system between school and work and wedding stuff, it just did not happen. Guess what? The veggies noticed! On the top of the list for next year: ACTUALLY setting up the damn irrigation system so that watering is automatic and easy. Following water in negative impact was simply time. I didn’t put in the time or energy into tending and pruning and vegetable whispering. Last year I was so enamored by the little sprouts and seeds and happy veggies coming up (yes, I know I’m a dork), I spent a ton of time just playing in my garden. This year, I was too side tracked by organza flowers and programs and wedding errands. I did not appreciate the garden as I had in past, and I think the veggies could tell. (Not to mention, we were on the Hopscotch Honeymoon for almost three weeks and missed the start of harvest.)

I also found myself annoyed at my chosen plants and that never helps. I planted squash for the first time and it took over! Want to talk about the bully of the garden box, the squash smashed the carrots, overcrowded the beans and creeped up on the tomatoes. I *almost* pulled it out early but felt guilty and left it in. The silliest part? I don’t even LIKE squash. Note: Only plant things you LOVE. Which means, I will not be planting beans again. Like the squash, they take up too much room and do not play nice with other plants.

At the end of a sad summer growing season, I will not be surprised if next year’s garden consists solely of tomatoes and basil. In the mean time, I’ll work on a fresh attitude and hopefully be excited to play in the dirt come Spring.

P/S Lest you think I have a BLACK thumb, these are October pictures people. I did have mild success throughout the actual season.