I grew up with the succulent scent of homemade spaghetti sauce filling the air. I’m talking all-day on-the-stove torment pushing the bounds of any little girl’s patience*. I’m pretty sure the original recipe came from my Malvini great-grandparents, which makes sense as they emigrated** directly from the “old country” as they say (on TV).  Dad’s got a variation, mom’s got a variation and now Shawna does, too. As the process is somewhat labor intensive, I seem to delay sauce making for years at a time. But thanks to my new 20-quart stock pot, I may not run out of sauce until 2020 which is good because this sauce is the best ever. Ever, ever. (Always modest with my cooking you know.)

If you have an hour or so to prep and a few hours to simmer, you will not be disappointed! (Note, the proportions listed below are approximate. Scale to fit and/or adjust to taste.)

Directions:
1. In a stock pot, throw in all of your tomato products and the sliced olives. Over medium-low heat, start them simmering. Take care with the heat during the entire process. You want to get the sauce to just bubble and then turn the heat down to a low simmer. Burning the bottom will ruin your sauce.

2. While the tomatoes warm up (took forever for me!), chop onions and cook the sausage links according to package instructions. This took 20 minutes for me. Let the sausages cool on a plate with paper toweling.

3. Brown the hamburger with onions, a bit of salt and black pepper. When done, strain the fat and throw the mix into your stock pot. 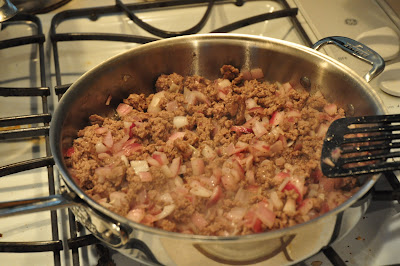 4. If the links are cool enough to touch, slice them into discs and toss into the sauce.
5. If you’re in a bind for time, you can throw the mushrooms straight into the sauce, but I find a quick sauté really adds to the flavor. Melt butter or warm up your oil. Toss in your onions for a minute, then your monster wad of garlic for a minute, before finally adding the mushrooms. Sauté until they cook down and most of the water evaporates. I added a few generous splashes of wine for more flavor. When you can’t stand the amazing aroma any longer, throw them into the pot.

6. Bring your sauce just barely to a bubble and then simmer, stirring occasionally. (Somewhere in there, add the wine and stir well)
7. After an hour, add spices and stir well. Simmer, simmer, simmer.
8. Simmer as long as you can, adding more spices to taste as you go. Serve over pasta or drink straight. 😉

9. Allow to cool a bit before storing, it also freeze well.

* However, the long duration on the stove did afford time to steal sausage pieces from the pot under the guise of stirring. Do not tell my mother.
** According to my extensive five-second research, emigrate refers to leaving a particular place, while immigrate refers to arriving in a new place e.g. my family emigrated FROM Italy and immigrated TO America.
*** Yeah, yeah, yeah. If I were a real Italian, I’d make my own sauce from scratch but who has that kind of time during the holidays?