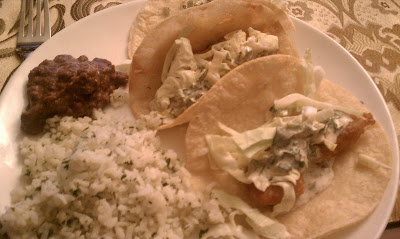 On the list of things I never thought I’d find myself cooking, fish tacos are somewhere in the top 20. Why? Because historically, I’ve hated fish. HATED. It’s only been since my Ukiah days that I’ve even considered letting scaly swimmers pass by these lips. (I thank Shannon and Oco Time sushi, amen.) Since my veggie, then cooked-only, then sashimi-is-yummy sushi evolution, I’ve tried to incorporate fish into my regular food rotation. I admit, I’m still a mild fish kind of gal: halibut, cod, tuna, the occasional sea bass. I hate, and I mean hate, salmon and anything that tastes remotely fishy, but I’m working on it. When I saw this recipe featuring cod and a spicy white sauce, I thought what better way to inject some summer into an otherwise rainy March day? Enjoy!

NSFD ranking: ***
Notes: As many comments on the original recipe attest, the star of this dish is the spicy sauce. I added cilantro for sweetness which will be even better when it is actually summer and the cilantro actually smells like cilantro again. Ah hem. The batter is very bland, even with a dusting of Essence. I would kick up the salt and pepper next time. (I did not add the full quotient of salt this time, fail!) I think it would also work well to grill the fish instead of frying, but again, rainy March days typically preclude grilling. You know how it goes!
xoxo,
shawna