It’s spring break for me and I’m supposed to be in Tillamook, Oregon eating cheese right now. Long and short (well, long for Mr. T who worked for almost 36 hours straight from Friday to Saturday), we are not in Oregon and I am not* eating cheese. Or ice cream. [Sigh.] Instead, I’m relishing the unexpected time at home, in my own bed and in my own kitchen. Yesssssss!

To kick off my Spring cooking frenzy, I found this recipe forwarded by the Pioneer Woman which showed how to butter braise onions in a slow cooker. As my roommate has been on a “Set it and forget it!” crockpot kick since the beginning of the year, I thought what better way to dust off my slow cooker skills than with braised onions. And what better meal for braised onions than French onion soup!
Of course, butter braised onions take at least six hours and after a beautiful family brunch yesterday, I found myself quite without time (unless we were to set our alarms for soup at midnight). Instead, I used a highly rated Food Network recipe and discovered that carmelizing onions takes for-ever. The results, however, were SO worth it.
NSFD Ranking: **
Ingredients:
1. Melt butter in a large, flat bottom pot over medium heat.
2. Add onions, thyme, bay leaves, salt and pepper. Allow to cook for a few minutes and then add garlic.
3. Cook until the onions are very soft and caramelized. The original recipe said this takes 25 minutes, but mine took almost an hour. The idea is to get dark, sweet, creamy onions (see here for a how-to).
4. Add wine, bring to a boil. Reduce heat and simmer until wine evaporates and the onions are dry. The original recipe times this at 5 minutes. Mine took 10+.
5. Remove the thyme and bay leaves. Dust onions with flour and stir. Reduce heat a bit to keep flour from burning and cook for 10 more minutes. Stir and scrape to keep the browned bits from burning.
6. Add stock or broth and simmer for 15 minutes. Season to taste.
7. Slice baguette or crusty French bread into 1-inch thick pieces. On a foil-covered cookie sheet, broil on high for 3 or 4 minutes until toasty.
8. In oven-proof bowls, ladle soup, top with toasted bread and sprinkle Gruyere (or Swiss) liberally. Return to oven on foil covered cookie sheet and broil for 3-5 minutes. 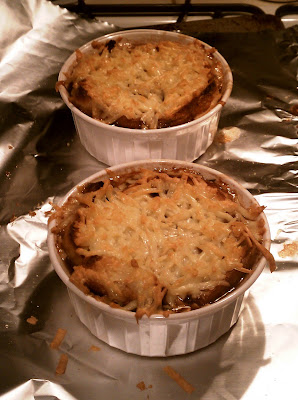 9. Enjoy immediately with salad and re-runs of American Idol. 🙂
Notes: In restaurants I find French onion almost unpalatable due to over-salting. To control seasoning, I used reduced-sodium stock. Although delicious as-is, I would probably kick up the cayenne just a touch and stir in a tablespoon of cognac (or lemon juice) as the original butter braised recipe suggested. I forgot!
xoxo,
shawna
* That may be a smidge bit of a lie. In honor of Tillamook, I’ve eaten both cheese AND ice cream several times in the last few days.