Although I am still waiting for my headache to go away, the hoopla about my experience on Southwest Flight 812 is slowing down and I’m starting to catching up on my “coverage.” The good news, I don’t think I screwed up the interview on Good Morning America despite being half asleep (see here) and the NPR coverage was accurate (see here). The annoying news? People are mean! 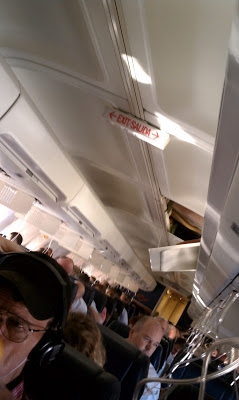 I have virtually no experience with “celebrity.” In college, I was an anchor on Blue Mountain News (viewership of approximately 7 retirees) in Walla Walla, Washington. I was delighted to be recognized once or twice. In terms of this blog, I’m pleased if I can get a few folks to read it every day. I have not really been the subject of public scrutiny. I asked my sister Brenda (lead singer of the Brooklyn-based band, North Highlands) what it’s like and she said that people can be so cruel. Turns out, she was right, so I’ve tried to avoid reading comments on the various news articles and videos. Until, that is,  Mr. T showed me comments from a C-Net article. They are so funny that I just have to share… (I’ve cut and pasted the most hilarious ones.)
The start:
by d_adams April 2, 2011 12:52 PM PDT
“She turned her cell phone on at 10,000 feet and texted her husband”. What’s the deal with texting these days? I don’t know about the rest of you, but my first instinct, if I were in a I’m-going-to-die-and-there’s-nothing-I-can-do-about-it situation, would be to CALL those I love so I could hear their voices one last time.

The rational reply (and absolutely correct, by the way):

by jader3rd April 2, 2011 1:07 PM PDT
If the hole cause a lot of noise calling may have been inneffective.
When I laughed out loud:
by musefred April 2, 2011 1:16 PM PDT
What’s the deal with calling people these days? I don’t know about the rest of you, but my first instict, if I were in a I’m-going-to-die-and-there’s-nothing-I-can-do-about-it situation, would be to send those I love an old school handwritten letter!

Why I’m still laughing (although I am not a valley girl thankyouverymuch):
by smeliot75 April 2, 2011 5:44 PM PDT
They just released her text: “OMG like there is a ginormous hole in the plane. This O2 mask stinks! lol C ya soon! PS I heart U.”
Laughing, but for a different reason:
by subslug April 2, 2011 3:59 PM PDT
Is it all this texting causing holes to be blown into the plane? Aren’t cell phone suspect number one in plane crashes? They never tell us why they just say if you turn on your phone, all will die.
See, texting does have a place in certain situations (former students: it is still NOT the classroom!)

Well a plane travels how fast? Engine noise? Winds tearing in?“Honey we’re going to die I love you!”
“What was that? I cant understand you?”
“We’re being blown to OZ tell our daugheter I love her.”
“WHAT!? You want me to beat the dog with gauze? Honey what was that loud boomb? Honey? Can you hear me now?”
Give a good argument for sending a txt.
xoxo,

3 Responses to "Southwest Flight 812: Comments that crack me up!"