It’s been less than 18 hours since Southwest Flight 812 made an emergency landing in Yuma, Arizona with yours truly aboard. In addition to local Sacramento news channels, I’ve spoken with Good Morning America, Fox, MSNBC and The Associated Press. The WSJ radio, CBS and Geraldo’s weekend show have also called.

Thanks to my Twitter feed and photos, they all seem to want to know my story.

Not my story, really, but the experience of a plane going down, of 118 individuals facing mortality. You know, the stuff nightmares are made of.

Only there really isn’t one story. I have my version. Gary, my seat mate and new BFF has his depiction. The individuals flying towards the rear of the aircraft–FIRST TIME FLIERS–have their story. But I feel like a common thread is humanity.

Several news outlets have asked me to confirm what other passengers have described as “pandemonium.” In regard to physical stimuli and noise? Sure, that word works. In terms of the behavior of people? Not a chance.

What struck me, what I found completely remarkable was the extent to which people remained calm during the ordeal and stayed congenial throughout the landing, waiting, transfer and flight to Sacramento. 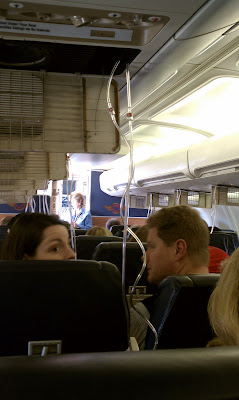 I fly every other week when school is in session, upwards of 75 flights per year lately. I watch people. I study their interaction. By and large, we don’t interact in airports. (Stay tuned for my theories on why in my up-coming dissertation). We don’t talk to each other. We stand mere inches from people–sometimes touching strangers–and do not make eye contact, extend common courtesy, or exchange pleasantries. Just watch a Southwest boarding group to see how many people avoid eye contact, just praying that no one sits in that middle seat. I know, I do it too. There are exceptions, of course, but mostly we do not engage with others during air travel… unless we have to.

Because of my observations and the depictions of plane crashes in movies, I expected chaos to erupt during the landing. I anticipated more crying, more screaming, more anger. During our two and half hours on the ground hoping for a new plane, I waited for the griping, the grumpiness, the impatience. And you know what? It really never came.

During the flight, people remained remarkably calm. I watched a young man get up and help others with their masks. People shared their chewing gum with others to help with the ear popping. We talked. We joked. On the ground, we cheered for our captain. We hugged each other. I’m pretty sure I cried a little. While waiting, we joked and laughed and watched the crews inspecting the damage. We talked about the irony of April Fool’s over and over. Although it was hot and muggy, and we didn’t have anything to eat, and the new plane took what seemed like forever, we stayed positive. And, something I hardly ever see, we helped each other with luggage.

Miracles I tell you.

22 Responses to "Southwest Flight 812: Restoring my faith in humanity"