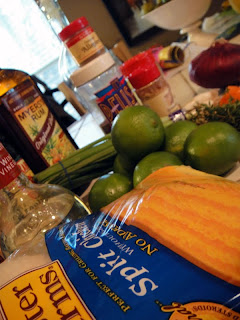 That’s about as close as I’m getting to the Caribbean any time soon unfortunately (insert sad face here). But just because I’m not visiting for awhile doesn’t mean I can’t eat like it, right? And thus, in an aching-for-vacation-but-making-do-in-the-kitchen fashion, I present my first foray into Caribbean-inspired cooking: Jerk chicken, cilantro rice and Cuban-style black beans.

Get started early on the chicken as it needs a day to marinate, but trust me, it is time well-spent. This meal turned out to be flavorful, well-seasoned and a snap to get on the table. Oh and mostly pretty healthy, too!
Juicy Jerk Chicken
NSFD ranking: *-**

I followed this Simply Recipes version to a T. Rather than repeat the instructions, I’ll show you some photos and hot tips. 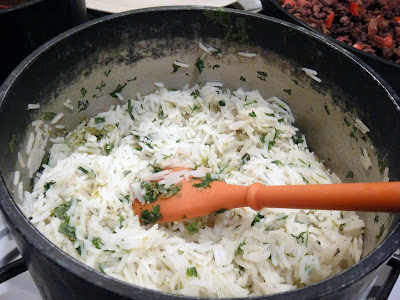 I’ve tried cilantro rice once in the past, but it ended up being an icky sticky mess. The key? Following these directions and using basmati rice with chicken stock subbed for water. Please don’t tell the jerk chicken, but the rice was probably my favorite part of the meal. SO flavorful and fluffy.

Notes: The recipe calls for lime juice and lime zest. (See what I said about limes?) Don’t skimp on the zest even though it’s a pain and takes two limes to get a teaspoon. The zest makes it!

I must admit that my hankering for a Caribbean-style meal came from watching Dexter which is set in Miami and portrays a lot of Cuban influences. Initially I thought I’ll make Cuban food! And then I thought, I have no idea what that means! I did some googling and ran across a site called “Three Guys from Miami” and they present authentic Cuban recipes with mildly amusing commentary. Since T requested jerk chicken, I only pulled a side dish from the site, but I hope to get back there soon and try one of the entrees. I’ll let you know how it goes.

I concocted the quick black beans which call for three cans of black beans, bell pepper, onions, garlic and vinegar (see here). It turned out to be quite flavorful and complemented the rice and chicken well. The only thing? Three cans of beans for two people is a bit much even factoring in leftovers. If you’re cooking for a small group, you might want to cut the recipe in half.

One Response to "Channeling the Caribbean in the kitchen: Jerk chicken, cilantro rice and Cuban-style black beans"