Yesterday, as we tucked into a surprisingly un-disgusting first anniversary freezer cake (e.g. the remainder of our mini-wedding cake, frozen for posterity), I got to thinking about our day. I flipped through pictures, reread my vows, and pestered Tim to recall his favorite parts of the event. I perused our feature on the Offbeat Bride blog:  “Shawna & Tim’s Aviation Extravaganza” (Still can’t believe that actually happened!) and I realized I had one big fat regret. 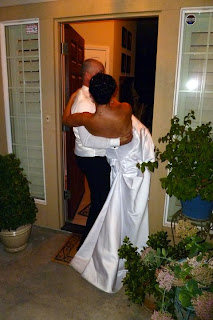 Now, if you had asked me the day or month or six months after the wedding, I would have told you that my one regret was not leaving the party early and letting someone else clean up. (Thank you SO much to the wonderful stragglers who helped us pack up!) Then again, had we not stayed until the bitter end and had our dear friends the Emersons not followed us home with a minivan packed to the gills with leftover wedding crap, we would have missed this picture…

No, my one wedding regret is not capturing the ceremony on video. We purposefully opted to shuffle all available funds* to the best wedding photographer in the west (Beth Baugher of True Love Photo!). It made sense. We were following the “Pick the important stuff, and don’t worry about the rest” model of wedding planning. At the time, all I could think of was dueling photographers and hokey video music, no thanks. But what I didn’t realize was that I would really want to listen to Pastor Dan’s (now Iron Man Dan!) remarkably poignant (and funny and touching) homily. And I would really, really want to hear my sister Brenda’s original song that made me cry right before I had to speak. And I would really, really, really want to hear us say our vows to each other. Sigh.

In the grand scheme of things, ’tis but a small bit of wist but for those doing the wedding planning game, I’d highly recommend someone there with a video camera. I wouldn’t have hired a pro due to budget considerations, but for all those people who asked if they could help, I would have assigned someone (or two or three) video duty. Or at the very least, I would have hidden an audio recorder in my corset. Ha!

* I may have even promised her my first born after the engagement photos came back so fantastic.