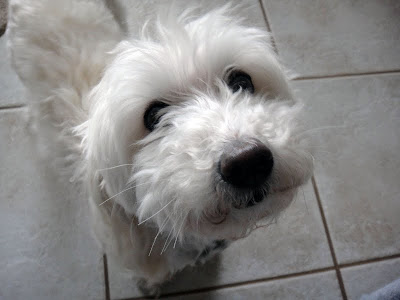 Goliath, all 12 fluffy white pounds of him, is not a guard dog. Size not withstanding, the poor fellow survives without 10 of his front teeth*. A killer, he is not. What he lacks in ferocity, however, he makes up for in barkocity. He doesn’t yap, but rather exudes a quite impressive bellow for a canine his size, one that resounds throughout the whole house, particularly when I’m on the telephone with my boss. (Thanks, G.) When not conked out in the sun, he patrols the residence throughout the day and lets me know if the mailman’s around, who is doing yardwork across the street and how many dogs have the audacity to visit his lawn. I know these barks. I understand this communication. I’m prepared for the sudden howling and tinkling of his collar as he runs to inspect whatever needs inspecting.

On Saturday, it was different. On Saturday, G went ape, sniffing and scratching and trying to barrel his way through the front door as viciously as a diminutive doggie can. What in the sam hell is going on?! I wondered as I ran from my comps prep perch on the couch. I was not prepared for my visitor.

Peering through the shudders, I could just glimpse something big and birdlike pecking at my bougainvillea. With my best “SHEW!” ready, I swung open the door to find not the turkey I expected, but a peacock. A tall, emerald-necked peacock who looked up at me briefly before nonchalantly turning back to the magenta flowers of my potted shrub. Huh.

Having not seen a peacock up close since childhood, I ran to get my camera before following the bird, barefooted, up the street. Between snapping photos, gawking and trying to pretend the pavement wasn’t searing off the soles of my feet, I willed him to open his feathers. Come on pretty boy, I wooed, strut your stuff already! Wishful thinking got me nowhere, so after 10 minutes, I posted his photo on Facebook complete with a caption that suggested I must not be his type. (The strutting and preening of peacocks is typically a mating ritual.) As it turns out, I must not be her type, as a dozen of my friends informed me I was wooing a peahen, the lady version of the bird.

Hopes dashed and sufficiently chagrined, I went back to my studying. The hours wound away until evening time when T called to say he wouldn’t be coming home. He’d been off to a pilot mini-retreat in the mountains and deemed it safer to sleep over than fly rugged terrain in the pitch dark. That left me, re-runs and comprehensive exam reading for a thrilling Saturday night! I didn’t realize what a thriller I had in store for me later, however.

After reading until my eyes hurt, watching Burke leave Christina at the altar, and seeing Morgan and Prentiss catch the unsub, I headed to bed. As I closed up the house, turning out lights and turning down sheets, I realized I hadn’t slept alone in the house in ages. It was then that I noticed the strange clicking in the living room and what sounded like branches crunching in the backyard. Was that someone peering in the bedroom window (or the oak tree that’s been there for two decades)?? Sleep came fitfully as I found myself trying to help the Criminal Minds team track down the latest serial killer. I recall desperately attempting to tweet to Dr. Spencer Reid (I follow his zany GUBLERNATION on Twitter) because I knew what was missing from the profile. That’s when I heard the scratching. The actual scratching that sounded like someone trying to get in my house. And then I felt the thump on my bed that sent me ramrod straight, pulling up the covers and screaming as I stared into coal black eyes.

The coal black eyes of a whimpering Goliath. 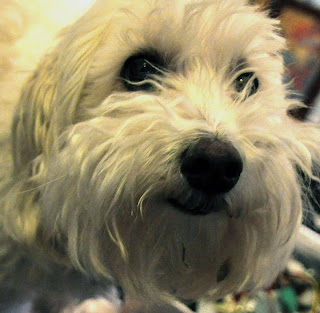 Although pleased not to be confronting a knife-wielding murderer, G’s wake-up call spelled a 1 a.m. walk and the promise of indigestion-related interruptions all night long. Fun. Times.

Somewhat sleep deprived, I cruised into the work week leaving behind a constructed nightmare (thank you, BAU) only to enter into a very real one. The kind that plagues teenagers around the world. The kind that transforms mealtime into mayhem. The kind that involves turning teeth and moving midlines. I’m talking braces people. Braces. At 29. Wowza.

Of course, vanity calls and I’m going the invisalign route which is only slightly better than a full metal mouth. I’m hoping to add “have straight teeth” to the 30-before-30 list, but we’ll see. My dentist tells me I’ve got a strangely complicated case so I may be in tooth traction for the better part of the next 14 months.  The fun never ends!

Now that my ranting is over, I promise something somewhat substantive this week. Perhaps a recipe review of the first from-scratch cake I’ve ever made (pre-the “I’m fat!” post, for the record) or some new yoga revelations or a record of attempts to extend sunlight for my little-garden-that-could. Preferences?!

* I’m a bad dog mommy, just so you know. See here for proof.