Ever asked yourself what you’d do with 26 pounds of blueberries? Me neither until after our first anniversary trip to the Pacific Northwest (see here, here and here) where a well-timed blueberry picking adventure left me with boatloads of blues to deal with. It’s a DELICIOUS problem, by the way.

After washing and debugging, I got set to work enjoying. In addition to fresh by the fistful and frozen for the winter, I concocted sorbet, ice cream, two crisps and two different types of pancakes. Can you say delectable?? Here are some recipes and commentary to help you if you ever need to process blueberries by the ton.

It should go without saying that all recipes mentioned are classified as *** on the NSFD ranking system. 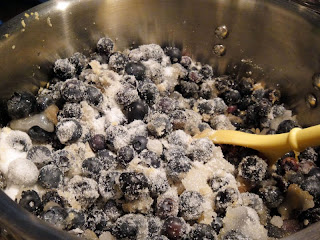 This may be my favorite ice cream ever if for nothing else than the lovely purple color. The sweet and delicate blueberry flavor just adds to the fabulousness.

I started with this fairly easy recipe (see here), adding a couple teaspoons of vanilla for additional flavor as well as a bit of lemon zest. I cut the sugar down to 1.5 cups because my berries were perfectly sweet. I used the prescribed half and half, but have also had success subbing with fat-free in other recipes. Do take note when reading the recipe that it calls for a mere two tablespoons of water. 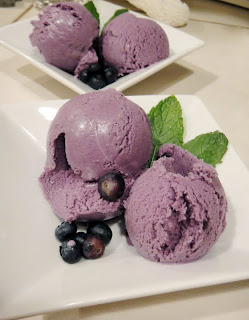 My only critique is that the ice cream got a little icy after firming up in the freezer which is not uncommon with homemade productions. I read this great article with tips about how to keep homemade ice cream soft (mine often turns into a rock!) and will try incorporating a smidgen of corn syrup just for softness. (When I do that now, I reduce some of the sugar.)

If you plan to work up this recipe, do start ahead of time as the mixture needs to cool in the fridge for quite some time before hitting the ice cream maker. Oh and don’t be like me and attempt to use half-frozen ice cream canisters. You’ll be left with chilled blueberry soup and not creamy goodness!

Tarty and Tangy Blueberry Sorbet
In addition to the prettiest ice cream that ever was, I created some sorbet for the lactose intolerant family members at a recent family gathering. Holy cow, I might even like the sorbet better than the ice cream. It turned out tart but not sour, creamy without any milk whatsoever. Definitely a superlative sorbet experience! 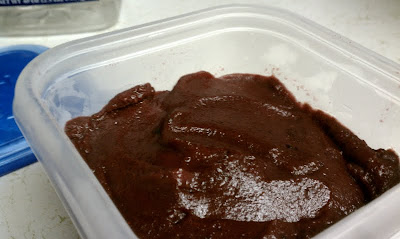 I worked from this recipe adding a little vanilla and a tablespoon or so of corn syrup for softness. (If you reference the how to make great homemade ice cream article above, you’ll notice you can also use a tablespoon of vodka or other flavorless liquor to achieve softness without increasing the sweet.)


It’s a bit work-intensive to smash blueberry mush through a mesh sieve, but the result is worth the effort! 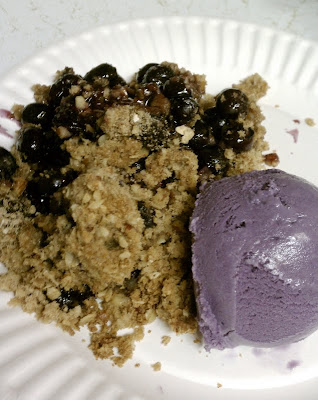 In a perfect world, one without expanding waistlines and pants that refuse to fit, ahem, I would have made a blueberry pie or three. Instead I went with the next best thing and found a decent crisp recipe that hinted at pie goodness with a fraction of the fat.

After trying a somewhat blah Cooking Light recipe, I found this Food Network version. If you’ve been reading along thus far, you might guess that I added vanilla and lemon zest to the filling and you’d be right. I also reduced the amount of butter in the topping and used regular oats instead of quick cooking.

The crisp was a mighty hit with my fam. Refreshing, light and really focused on the berries. It paired well with blueberry ice cream and sorbet, but would have shined even more with a plain vanilla.

Although I liked it, I think it would be improved with a mixture of berries, say blackberries and raspberries, as the blueberries retain their shape and don’t thicken up much with the corn starch. Still, for a simple crisp this one’s a winner. 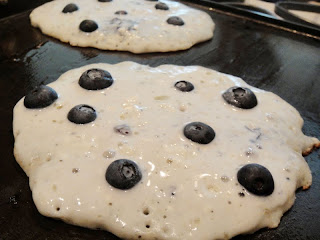 On the list of things I can do, making pancakes is not featured. I suck at pancakes. I burn them, undercook them, smash them, swear at them, whether I’m working from scratch or using Bisquick. It’s not pretty. But after reading this recipe on the Smitten Kitchen, I thought, I can do this. I can make blueberry pancakes. It turns out, I cannot.

Although I followed the recipe pretty carefully, I deviated by adding some leftover blueberry mush from the ice cream recipe above. Maybe that’s why I got greenish-blueish crepecakes and not the beautiful fluffy cakes Smitten shows in her blog post. Mr. T was a trooper though and ate all of the cakes he was served, even pretending to love them. Such a good man! 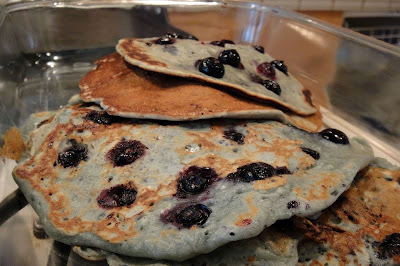 I’m guessing my additions and substitutions may have contributed to the paper-thinness of my cakes. I didn’t have the buttermilk her recipe calls for so I created my own. (It’s super easy–just add a tablespoon of white vinegar or lemon juice to a cup of milk and let it sit for 15 minutes.) Whereas buttermilk is usually fatty, I’m wondering if my skim milk made the recipe runnier than usual. I will never know! One thing I did like was that the recipe called for pouring batter and then placing the blueberries on top instead of mixing the blueberries in and hoping for an even array. Overall, good taste, icky texture. 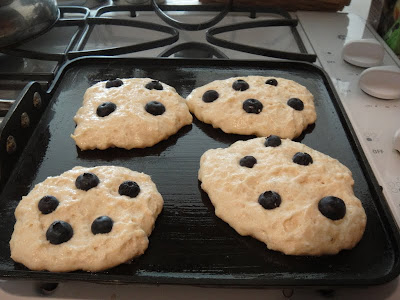 Not one to take defeat easily, I tried another of Smitten’s recipes this morning: “Blueberry Yogurt Multigrain Pancakes.” VICTORY IS MINE! These cakes were PERFECT. Fluffy, light, lemony, delicious.

Although Smitten calls for healthier flours, yours truly only had white flour in the pantry. I also used fat free Fage Greek yogurt (instead of the full fat she asks for) as it was all I had on hand. That and a smidgen less butter were the only changes I made. Please stop what you are doing and make this recipe, you will not be sorry! 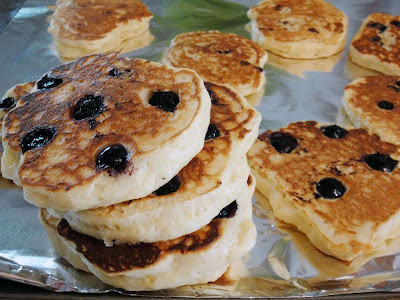 Do note the batter is quite thick and definitely not pourable. I used blueberry placement as a chance to smooth out the dollops although as you can see, I wasn’t a stickler for shape quality control.

I’m not sure I would make the cakes without blueberries as the berries and lemon zest paired so perfectly together. I think the lemon alone might be too one-note for a good meal, if that makes sense. Then again, I’m clearly no pancake connoisseur!

Any good pancake making tips for me?

What are your favorite ways to eat blueberries? Do tell!