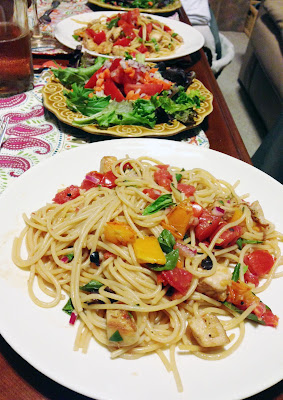 When Mr. T and I first started sharing space, I got into the habit of cooking dinner. I don’t know that it indicated my Betty Crockerness so much as my Italianness. She who gets hungry first initiates the dinner apparently. Way back when, I was a special occasion cook. I had a few signature dishes, but for normal nights, I defaulted to the ol’ standbys… tacos, stir fry, chicken bake, and of course, spaghetti.

Growing up, my sister and I could eat spaghetti for days on end: breakfast*, lunch and dinner. If you knew how my parents cooked spaghetti (see here for my rendition), you’d understand why. Naturally, I saw no problem with a twice-a-week spaghetti rotation, but T saw it differently. Apparently normal people tire of the same meals week after week. Huh. (Do recall my creature-of-habitness.)

In recent times, I’ve expanded my cooking repertoire significantly, mostly for fun and partly in light of my goal to try 25 new recipes this year. Last week, I cooked up a spaghetti dish unlike any spaghetti I’ve had before. Summery, tomato-y but not tomato saucy, appropriately salty, crunchy, light, yum. It tasted puttanesca-esque, but so much better. 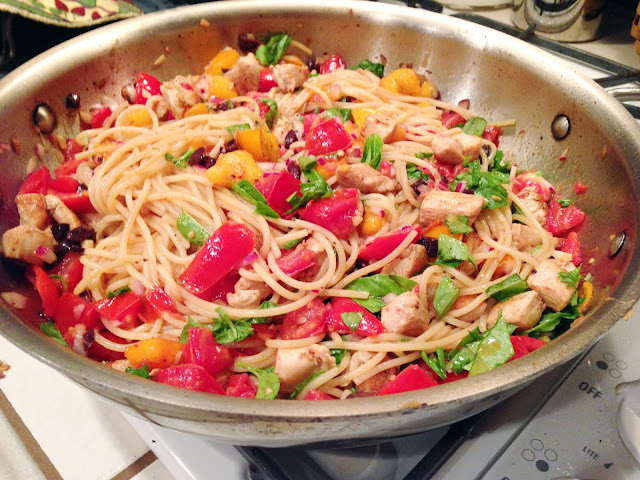 Directions:
Bring a large pot of water to boil over high heat.

Meanwhile, core/chop tomatoes. Toss into large serving bowl, along with the onions, olives and capers. Whisk together the oil and vinegar in a measuring cup until emulsified. Add to bowl. Season with (optional) sugar, salt and pepper to taste. Stir. (I added red pepper flakes as well.) Let the mixture sit while the pasta cooks.

Cook the pasta in salted water according to package directions. The original recipe says to drain the pasta, add it to the bowl of tomatoes and toss to incorporate. Then let the mix sit for 10 minutes before serving with drizzled olive oil.

Shawna’s variation:
Before chopping anything, melt butter in a skillet and saute quartered mushrooms with garlic, salt and pepper. Add red wine (or chicken broth), reduce to simmer. Stir occasionally, adding more wine or broth as the liquid evaporates. Follow the directions above until combining the pasta and tomato mix.

Drain pasta and return it to the pot, adding 1/3-1/2 of the tomato mix. Add the rest of the tomato mix to the mushrooms, stirring frequently. The idea is to warm up the tomatoes without cooking the hell out of them. Plus, it will briefly cook the onions and make them happy. Total time cooking- 2-3 minutes. Add the tomato/mushroom mix to the pasta/tomato mix. Serve with crusty bread. I also grilled marinated chicken breast, cutting it into chunks and adding it to the pot before serving.

The spaghetti was even better the second time around after the flavors had had a chance to marinate all night. I incorporated more fresh tomatoes (grapes cut in half) and fresh basil. Delish!