If I were a basketball coach, they would’ve sacked me mid-season. They would’ve blamed the lack of chemistry, the apathy, the mediocre performance, the whining, on my failure of leadership.

But I tried everything in my power to make things better. Everything.

It was clear very early in the semester that one of my classes was quieter than the other and painfully awkward. Like not responding to softball questions, just staring at me when I posed hypotheticals awkward. One word answers awkward. Not responding to “good afternoon” awkward.

It jarred me a bit, given that I taught the same class in the same room back to back, from the same population of students, with one or two that I’d had in past semesters. And that a hallmark of my classrooms is the engagement. After the vibrance of my 12:00 class, my 1:30 section felt like, to quote my favorite comedian Eddie Izzard, a “slow collapse, like a flan in the cupboard.”

A few weeks in, we were discussing organizational culture, and I compared my class sections to illustrate… It’s the feeling of a place. It’s the way people relate and talk… or not, as the case may be. It’s the vibe. All things being equal–location, subject, professor–classroom culture is that something that gets co-created and re-created everyday by the people in the room. It’s a bit of alchemy.

The next week–feeling frustrated–I queried the students to see if they had any suggestions. Students wrote how awkward our class felt, with one even suggesting that I might be running a social experiment between my two sections and creating the awkward. (As if!)

So I asked the class to circle up. We directly confronted the awkward. We laughed about it. We brainstormed how to fix it. We played an icebreaker. We talked. I had hope!

And then the next Monday, we went back to being the most awkward class ever. I changed up activities. I put people in different group formations. I asked to see if I somehow had a whole room of introverts–nope. I took us to different locations. I adjusted the manner of activities–always giving an option for writing first, then speaking, so people would definitely have material to work with. I incorporated more reflection exercises. And still. The awkward. 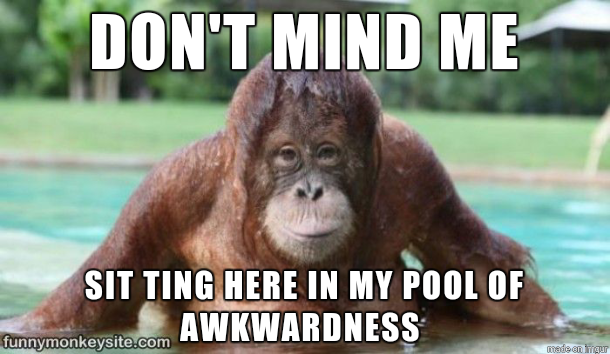 It became a character in our class, the awkward. We referenced it all semester long, especially when between 5-7 people started to miss class every day (although not the same people every time, oddly enough), so the room felt more empty. (And lest you wonder, I do take attendance.)

I could tell students felt bad–for me, for themselves–especially those with friends in the first section. I wish I could’ve transported the earnest students to the earlier class. It was certainly more fun and the students learned so much more. You see, this awkwardness didn’t just bother me because the vibe was less fun. My classes are not organized as content delivery mechanisms. The students are responsible to read materials in advance, and then together, we play with ideas. If there’s no engagement, there’s no learning. Or at least less meaningful learning anyway.

I’m sure my frustration showed. But it became a great example of the struggle of organizational leaders. Sometimes you can do everything, even implementing proven techniques for improving cultures, and still, it won’t make a difference without cooperation and buy-in from stakeholders. And true to form, a segment of the students blamed me directly in course evaluations. And I quote: “I guess she just doesn’t have the charisma to get students to engage.” Ouch!

Even before the evals though, it was humbling to feel that powerless, especially in my 11th year of teaching. How could I not fix it?? I tried to rationalize that it wasn’t me, it was us. But still. I admit feeling bitter towards the end, as it seemed like I was putting in all of the energy and getting minimal returned. The good news? It made me appreciate the great classes, because I know that the alchemy that makes some classes feel awkward is also the same that makes some classes, like my summer school section, extra magical.

And so, my hope for fall semester… please let the classroom culture alchemy be in my favor!