It was a week before Christmas and I was making dinner with the 1994 version of Little Women playing in the background. I watch it every holiday season, usually while decorating the tree. I know every line and find myself randomly quoting the film in conversation, although I’m usually the only one who realizes it.

One of my sisters had proposed a post-Christmas movie date and I was counting down the days, although a bit nervously. What if that Greta Gerwig ruined one of my favorites? Given her brilliant Ladybird, I didn’t really think it would be possible but I was still prepared to hold fast to my childhood classic. 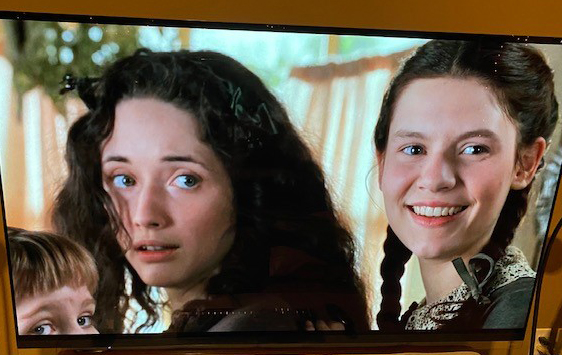 When the hair singeing scene came on, I snapped a couple pictures–Meg’s surprised face, Jo’s sulky attitude, Beth’s sweet grin, a sliver of Amy’s head, because who likes that brat anyway–and sent them to my mom and sis. Brenda replied “Aww” but my mom, who I have called Marm after the character of Marmee since the year of our lord 1994, replied “???”

I wrote back “Marm, did you forget a key point in our childhood??” with several laugh emojis, explaining I was getting pumped for the remake. Over the next few days, Marm kept commenting that she didn’t remember the Winona Ryder version and I kept telling her, of course she saw it. There’s no way we could’ve seen it without her, right?

A week passed and in a haze of holiday cheer, we found ourselves in the theater. From the very first scene, I felt in LOVE with Gerwig’s retelling and I cannot lie, I cried my way through the entire film. It was just SO SWEET. But also smart and thought-provoking and tender and hilarious and beautifully rendered. And, she even made me like Amy* a teensy bit.

One element that struck me was how much writing was a character in the film. With a book in progress myself, I deeply related to the latter scenes of Jo slaving away on her manuscript. Imagine me, dear reader, with piles and piles and piles of paper surrounding me right now, all artfully arranged like Jo. (It’s very nearly true, although the papers are receipts, old articles, junk mail, and torn up kleenex (thanks, Clyde), less than artfully arranged, but decidedly in piles. Sigh.)

After the film, Marm and I were in line for the restroom and she said she definitely hadn’t seen the previous version. The movie that was such a pivotal part of my childhood that I would change from Mom to Marm?! I must confess, I acted a little Amy-like in response. I lobbed SO much sass towards her before we went into our separate cubicles, the other moms and daughters in line chuckling at us.

When we reconvened back at the sinks, Marm mentioned how the reason she didn’t see it or probably doesn’t remember is that it came out just before her mom died from a long illness.

I GULPED, reaching for paper towels and trying to think of a response. To say I felt like absolute crap would be a mighty understatement. And then I said something like, “Well if that isn’t an Amy falling through the ice so Jo won’t be mad at her anymore excuse, I don’t know what is.” And then we were crying and hugging in the women’s room at the movie theater, because of course we were.

All this is to say, I am so grateful to have my Marm. Realizing that I am now older than my mom was when her mom passed, my heart just aches. I am thankful to live so close and be able to spend regular time with her. And I’m really glad she finally knows why I’ve been calling her Marm for the last 25 years. 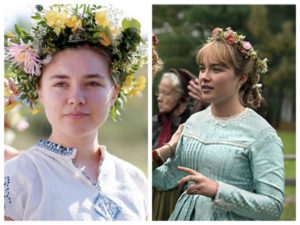 *Although OMG, the film should’ve come with a trigger warning. For some unknown reason, Mr. T and I watched Midsommar a couple months ago. I don’t like scary movies AT ALL and was especially freaked out by Florence Pugh’s character (I blame our collective flu for this mutual error in judgment). It took a LOT of work to see Amy and not the Swedish sex cult captive, ESPECIALLY WHEN SHE ROCKED A FLORAL CROWN FOR MEG’S WEDDING. I almost died.