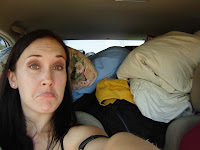 Part I: The Drive (Friday, August 14)
After contemplating packing, avoiding packing, starting to pack, avoiding packing again, packing a little, crying about packing, and finally packing a lot, I got most of my crap loaded into my gold Corolla. I had a big cry and then T and I hit the road. After stopping a few times, including Popeye’s, frappucinos, a tour of T’s old houses in Bakersfield, a pit stop on Route 66 and dinner in Needles, we reached the outskirts of Phoenix at 12:30 a.m. Saturday. Fourteen hours in the car meant two sacked out travelers so we crashed at the nearest non-scary hotel for a few hours of sleep. 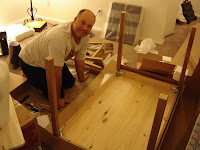 A teensy bit more driving through Phoenix and into Mesa brought us to my new digs at Rancho Palos Verde Apartments. It seriously pays to know people because my landlord, aka T’s airport friend DJ, authorized new carpet and paint for my corner unit. Not bad for apartment dwelling. Of course, an empty apartment does not a happy Shawna make, so we went shopping. Goals: Bed, desk, chair, dresser, bookshelf, table and other house crap.

Uhaul, Costco, IKEA, Goodwill, some random mattress place, back to Costco. Dinner, Starbucks (for Wifi), Walmart. Then the fun began… putting together cheap Swedish furniture. Fun times! (Especially when we get home and realize the sales clerk neglected to put the “midbeam” piece of my bed in the cart… so it was a queen mattress on the floor.) Next day: IKEA for missing parts, Costco, Goodwill, Walmart. Then lots and lots and lots of putting together. (Thank you T!!!)

Somehow we got everything in order–all furniture put together, computer set up, food in the house–before T had to leave around 6:45 p.m.

Part III: Alone in Cactus Land
Although I held it t 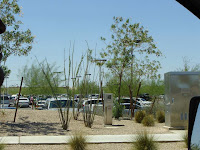 ogether for most of the drive down and almost all of the shopping excursions, I started leaking more and more as T’s departure time got closer and closer. By the time I dropped him off at Sky Harbor Airport, I was full on balling like a little girl. Slightly ridiculous considering I’ll be home in a few days and but still…

The ridiculousness intensified a few hours later when, having driven around for an hour post-Walmart, I still could not find my apartment. The airport tears had nothing on the I’m-so-lost-google-maps-sucks-I-don’t-want-to-die-alone-in-the-desert-maybe-I’ll-sleep-in-my-car-until-daylight type of crying. Then factor in getting pulled over, having to convince a cop I was not, in fact, drunk but rather just pathetically sad and lost. Then factor the embarrassment at getting laughed at by said cop for my illegal uturn in front of the POLICE STATION. Luckily, he was sympathetic once I stopped sniffling and as a fellow Italian, cut me a break before he went off to investigate the Subway being robbed at that exact moment. Exhausted and cried-out, I went home.

Luckily, while I am technically alone in Cactus Land, I think this is going to be an awesome adventure. Now that I’m done crying, I’ve decided to reframe and stop dreading my time in the desert. Thanks to the support of T and my friends and family, I have an incredible opportunity to take my life and career in a new direction, make a new set of connections and oh yeah, become DOCTOR MALVINI! (It will be Dr. Malvini Redden for those interested… I can’t wait for that little addition to my name, too!)

I will have to write about my first day at school later because said first day kicked my ass and I must bust to bed before day two starts in on me.