The thing is, I really like animals. As a resident pet-sitter for most of college and beyond, it seems I have a gift for bonding with random animals. I charmed my aunt’s horse in Idaho. I became a beloved of Sambo, the Chevalier’s junkyard dog. I even got my gram’s ancient (evil) cat Joe to stop biting me. These are great feats people! So it irks me to find that my current vet acts like I am a despicable dog mom because I am unwilling to spend thousands on my pet. Guess what people? He’s a DOG, not a person. 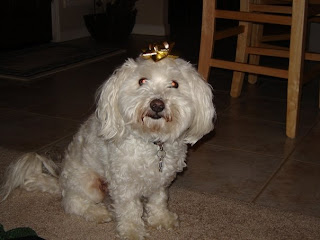 I love Goliath, our half-maltese, half-bijon friese fluff ball. He’s a cute, friendly lovebug that makes my heart warm. He follows me around the house, gives the best puppy-dog eyes and makes me laugh when he eats random things off the floor like bean sprouts and broccoli (I’m a messy cook). I toss his favorite toy (the hippo), walk him around the block even though he’s horrible on a leash and I let him sit on the couch with me even though Mr. T doesn’t like it. But I have rules. For example, Goliath sleeps in a DOG bed and eats his own food. While I sneak him bits and pieces every so often, I hear Shannon’s voice echoing “Not for dogs” in my ears while we’re eating dinner. No begging and no whining. While I try “four on the floor,” I can’t keep him from trying to walk on two legs, but ostensibly, the rule is, no jumping on folks. Be a civilized beast, okay?

I make a clear delineation between humans and animals. Dogs aren’t people and one of my pet peeves is when we treat them as such. Sure, I’m guilty of talking to the dog as if he has a clue what I’m saying. He knows “cookie” and “go out” and “hippo” but beyond recognizing intonation, he can’t speak English. (Shocking, I know.) And so, despite loving his cute puppy face, I’m unwilling to drop a grand on this doggie. Why are his dental cleanings so much more than MINE? Why should I spend $400 on lab work and xrays for a 12-year-old pet? No, consider me callous, but I do NOT want the vet to take “all measures necessary” to sustain his life in case of emergency. Certainly, try to save his fluffy buns, but don’t bankrupt me to do so. He’s a DOG.

While I’m ranting, I also don’t appreciate the vet guilt trip either. Despite the aforementioned perspectives, I’m not a bad person. Just because I don’t think doggy-dialysis or kitty-chemo are good ideas, doesn’t mean I deserve the disdainful looks or the holier-than-thou preaching that I need to do “what’s best” for the dog. Well guess what? If the dog is going to leave with your office on life support with no teeth, perhaps “it’s best” that he doesn’t come home at all! I can always buy a new dog, people. (Note: I fully expect Goliath to come home this afternoon. He’s 12, not 20, and his teeth aren’t *that* bad! Additionally, I will bawl (see T, I spelled it right) my damn eyes out when he finally does kick off, make no mistake.)

So, we’ll see what happens. G-dog is at the vet right now getting his teeth cleaned (under anesthesia, mind you). He’ll probably come back with far fewer chompers than he started with poor bastard, but as the vet tells me, this is an “investment” to prolong his happy life. We’ll see. In the mean time she’s holding my wallet hostage and I hope that his prolonged life doesn’t spell disaster for my finances!

In any case, enough whining about the little dog. I hope he comes back happy and healthy, and lives for another 10 years!