So I’m at the post office last weekend to buy stamps for our wedding collateral. I’m doing all the printed stuff myself and I was pretty jazzed about getting the first official announcements out the door. As the post office is just above the DMV in level of torture, I found myself observing the people in line to pass the time. No one looked happy. Only I, with a save-the-date burning in my hot little hand, seemed excited to be there. The employee expressions ranged from fatigue to boredom to vague disgust. The patrons seemed irritated and annoyed, although I think the slowness of the proceedings incited those feelings. It wasn’t until the kerfuffle (yes, I said kerfuffle) happened that I realized this wasn’t an ordinary post office pilgrimage.

Three customers ahead of me was a medium-youngish woman with an open box in her arms. When the counter agent finally called for the next customer, she proceeded forward only to hear “NO!! YOU GO BACK! I WILL NOT HELP YOU, YOU WERE DISRESPECTFUL TO ME! GO! GO! YOU WAIT!” yelled back. Having just entered the previously quiet line, I and my behind-me compatriots shared quizzical looks and tried not to act completely shocked. The woman shrank back to wait for another employee.

A few minutes later, it was my turn. I willed for another agent to be open, but no, I got Mr. Grumpypants. I asked him to weigh my envelope and he said only one stamp required. (Woot!) He offered me the choice of flag or olympic stamps, and when I mentioned the wedding and asked for another varietal, he brought out this: 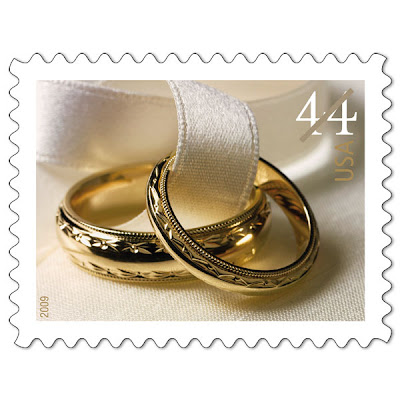 Now I know some of you might be thinking “That’s a fine stamp” but I hate it. Hate, hate, hate. I saw it online and immediately thought “The Simpsons stamps would be better than THAT.” Now I know you might be thinking the B word right now (ends with zilla), but it’s more of an aesthetic problem. I don’t fancy gold in general and those damn bands just conflict with my green envelopes and silver ink pen. And yet, I bought them. I bought almost $100 worth of stamps that I despised.

I left immediately disappointed in myself. Seriously? Had I really walked out of there with an unsatisfactory product? Why, why on earth???

Although the lesson probably has something to do with male aggression and authority (I bet we can find something in my psyche to explain this), there were several forces at work. 1. I was so shocked by yelling in a civilized environment. It just doesn’t happen that often. 2. I waited a freaking long time in that line and didn’t want to leave empty handed. 3. I needed the damn stamps. 4. I was actually afraid of being yelled at.

Despite the fact that my mom said she never looks at stamps, and Emily stayed quiet, and I tried to rationalize that “No one will ever notice,” the fact is, I still hated them. And I hated the thought of putting them on my cute save-the-dates. And I further hated that I had the forethought to buy ALL the stamps I needed thus sentencing my awesome wedding invitation to a crap stamp.

And so, I marched my tush into the post office in Tempe and completely blamed my “fiance” for buying the wrong stamps (Sorry Mr. T!). I didn’t want to tell the lady that the California post office people are mean and awful, and so I fibbed. I even painted myself as the bridezilla who hated stamps and went out of her way to exchange them. I even told her I’d put “Flags of Our World” on before those awful things. Luckily, she had something a bit better: 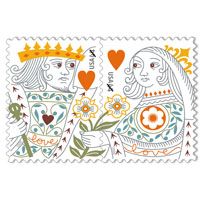 Now, the self-reflection part. I am completely ashamed to have bought a product out of self-induced fear. Would he have really yelled at me? Probably not. Would it have mattered if he did? Probably not. What matters is that I understand this experience and never repeat the scene again when it’s something that actually matters.

2 Responses to "Stamp Nazis and self-reflection"