My three alarms (yes, three) go off this morning and I burst out of bed. After grabbing my toothbrush, I head to the kitchen to clean the chompers while I make coffee left-handed*. As I reach toward the cupboard that contains the Life Force, I notice a cockroach–a small one, but a roach nonetheless. It’s not the first skin-crawling sighting I’ve made since living here, so I don’t scream (this time). Tossing the toothbrush, I attack the vile critter with Windex. True to form, he is stunned but not hurt and flings himself off the cupboard toward the coffee pot. (Inner monologue: NOOOoooOOOOoooOOOoooOOO!) Missing the brew basket, he scurries INTO my toaster. 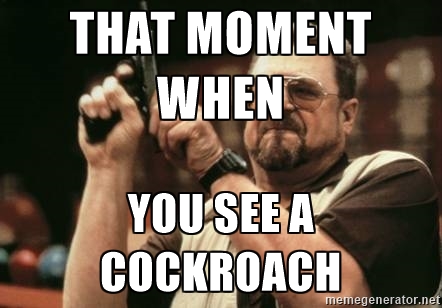 While spraying Lysol around the entire kitchen, I consider my options. I could throw away the toaster, but that involves touching it and potentially dislodging the infidel. I could ignore it and hope that the Windex did some damage, but it is unlikely. Or I can wait for him to rear his ugly head.

Skin-crawling and stomach uneasy, I disappear to school for a few hours and come home expecting a roach review on the kitchen counter. Nothing of the sort ensues, but after an hour I finally get my gumption up to touch the toaster. I poke it, nothing happens. I push it across the counter (with a shoe, just in case), nothing. Then I finally peer inside. Down at the bottom, lying amid my waffle crumbs, is the bug. Although it looks harmless all curled up (yay Windex!), I spray it with Lysol for good measure. In a few hours, I *might* have the nerve up to dump the intruder into the trash and banish him from my life.

Have I mentioned how much I hate apartment living???

* Yes, I am that talented. The siren call of the bean forces me to expedite the java creation when at all possible.