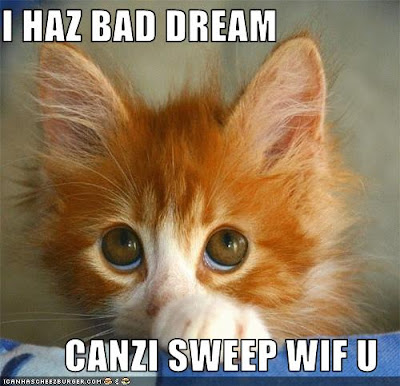 My grandma used to say that if you told your dreams before breakfast, they wouldn’t* come true. So every time I have a nightmare, I feel compelled to tell Mr. T no matter how superstitious it sounds.

Mostly my evil dreamscapes revolve around academic topics–getting lost, arriving late for the first day of class, not having syllabi for my students, my professor taking away my (fictitious) baby because “stupid people shouldn’t have children,” and the like. Every so often though, I have one of those cold sweat-inducing, wake up panting, can’t go back to sleep, wish the images would go away, doozies that make the next few hours of sleep nearly impossible.

Welcome to my 4 a.m. We were in London and Tempe and Seattle (all at once, of course), eating crumpets, drinking coffee, hanging with friends and tootling about. For some reason, T decided to move some random plane (in between buildings and hills) that was really a helicopter that was really a mini-Stearman with floats/feet. All of a sudden it started catapulting through the air, changing color, sans wings, and I saw *gulp* a head rolling about. Cue the screaming.

I woke up drenched, gasping for breath, unable to shake the imagery from my brain. I could not WAIT for T to wake up so I could tell him, but alas, the 4 a.m. thing precludes conversation. The intervening hours gave me time to realize just why the scenario couldn’t come true though. Shape-shifting planes aside, the bird never actually crashed. It merely rolled about, staying intact. The offending cranium was straight from Braveheart (the basket scene), and didn’t look a thing like T. Plus, T doesn’t have his helicopter ticket yet, so why would he try and move it in the first place?

I’m done rationalizing my crazy now. Hope your sleeps are nightmare-free. Please tell me I’m not the only one with weird brains!

* Man, I hope I don’t have this backwards…

4 Responses to "Bad dreams before breakfast"