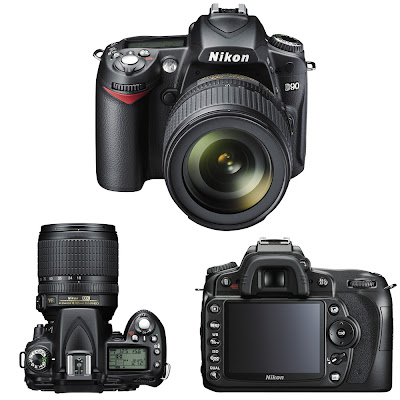 Although I may joke about getting old (seriously, 30 isn’t that far away any more), I’m one of those crazies who LOVES her birthday. Seriously. It’s MY day. Best day of the year! Presents and cake and sushi and a zillion Facebook* notes. And this year, there was the major spoiling from Mr. T.

For the first time ever, he bought gifts early. Like weeks and weeks early. And then he wrapped them and proceeded to torture me for weeks. Whereas I tried to tune out the four little packages on the fireplace, he constantly brought them to my attention. I begged** and pleaded just to open one, but he would not relent. Until this weekend that is…

His major concern with letting me open them four days early was that I would be disappointed on my actual birthday. Although I assured him, it took convincing. So I laid out all the ways my birthday would still be special. 1. I would still have said presents. The opening early would not make them any less fabulous on Wednesday. 2. There are still cards! And even flowers to make a birthday special. 3. I love expanding the birthday extravaganza. Start it early, end it late, that’s my thought on the matter.

Well, T outdid himself this year.

We played rock-paper-scissors (our main mode of decision making) to see if I could open them early and I am proud to remain the reigning ro-sham-bo national champion of the Malvini-Redden household. I am also the proud new owner of a Nikon D90! T upgraded my camera body and one of my lenses, and even got me a book so I can figure out how to work the things. So many more buttons than my D70S. WOOHOO!!!

The fun continues because yesterday he brought home a surprise bouquet of flowers and this morning? The most romantic card, ever. With his own** words written inside! And, DRUM ROLL PLEASE, confirmation for two nights at the Grand Hotel on Mackinac Island, our primo honeymoon spot.

Oh. My. Goodness! There was squealing and “Timothy, oh no you didn’ts” and much excitement. It’s outrageous but I’m just going to enjoy our itty bitty room and realize, honeymoons don’t happen all that often. Heee, heee, heeee! 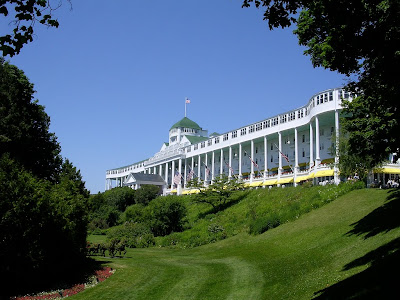 Straight out of Somewhere in Time! 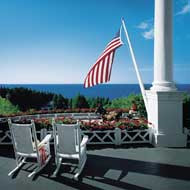 I thought T was joking when he told me that formal dress begins at 6 p.m. sharp. Skirts or slacks for ladies; suit coats and ties for gentlemen. I’m trying my level best not buy period clothes. Come on, wouldn’t he looked great in an ascot and morning coat?? 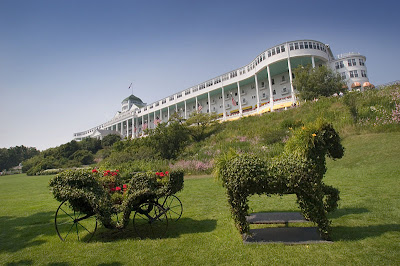 No cars on the island. Travel is by foot, bike or horse-drawn carriage! 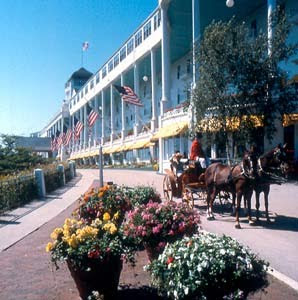 Okay, that’s all for now.

* Kind of fun to feel e-loved on your birthday but thank you to the two perpetual snail mailers. I really do love mail!
** Yes, I’m also a Christmas eve, open-one-present person, too!
*** T generally opts to let the card do the talking with the obligatory “Love, T” at the end. I was delighted to receive a smooshy birthday message today. Ahhhh.