I vividly remember the struggle. Grandma versus the 7-year old me. It was fried rice of some kind and I was done. Didn’t want to eat another single bite. I must have also been sassing because I distinctly remember the livid “You will not leave this table until you clear your plate” decree which really stung coming from gram. As I’ve gone on to lead a productive life, I’m pretty sure I ate the offending rice, but the “finish your food” mentality has stuck with me.

My grandma lived in Belgium during World War II and food was always scarce. I remember my mom telling me a story about a very young grandma being sent to a farm to sneak a side of bacon home on her back and being told not to deviate from the path for fear of land mines. Now, I could really be messing up that story, but the impact remained: In America, my grandma was obsessed with food.

A damn good cook, I look back now and realize she was also a horder. There was a normal fridge and pantry inside the kitchen. Plus a fridge and huge freezer in the garage. Plus oodles and oodles of food everywhere including a huge garden out back. And nothing went to waste. Although my grandpa hated leftovers, gram would disguise them into something different the next day. The point being, food was special.
Although Mr. T may not realize given my somewhat cavalier attitude about aging food* (and throwing it out), I shoulder immense guilt when we waste goods every week, especially produce. (It doesn’t help that we shop at Costco). In any case, last Sunday I decided to salvage all the sad veggies in the fridge and make a chili of sorts.

Here’s what you do:

1. Gather all the veggies in your fridge and chop. I had 1/2 an old onion, an almost-too soft zucchini, a bag of just about done stir fry veggies (broccoli, carrots, bell pepper) and some mushrooms. Chop into chunky pieces. I lean towards bigger chunks myself. Oh yeah, don’t forget the garlic. I smashed 10+ cloves and yes, I’m serious. 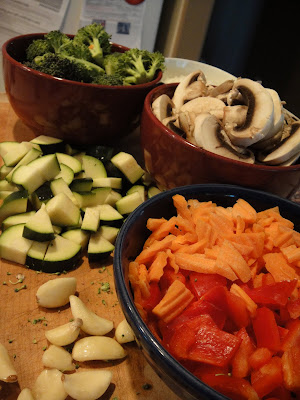 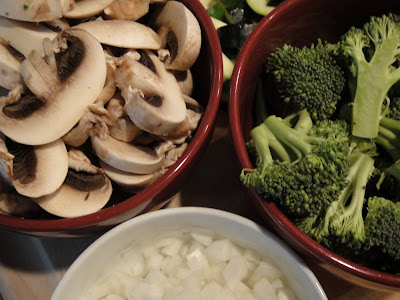 2. In a pot or dutch oven, heat some olive oil over medium heat. Saute the onions for about a minute, then add the garlic. Saute for another minute or so.

3. Add the veggies that take longest to cook e.g., carrots, bell peppers, mushrooms. I add one or two at a time (depending on quantity) so that the whole stir fry stays hot. 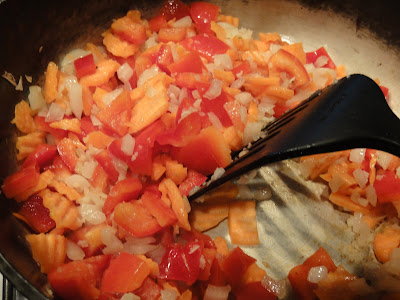 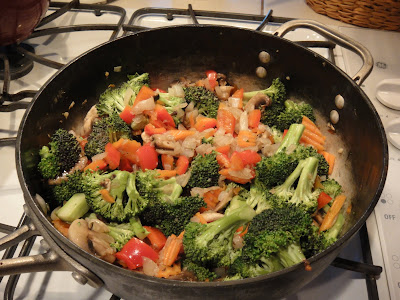 5. Add beans and liquids. Since I was aiming for chili, I added two cans of diced tomatoes (with juice) and two cans of beans. Next time, I’d add one more can of beans I think–pre-mashed for some added thickness. At this point, you could also go soupy and add broth. 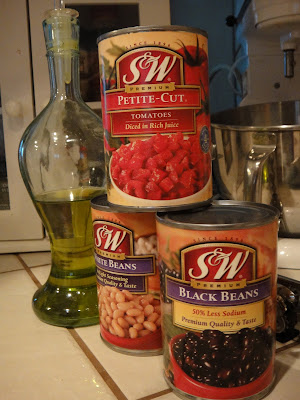 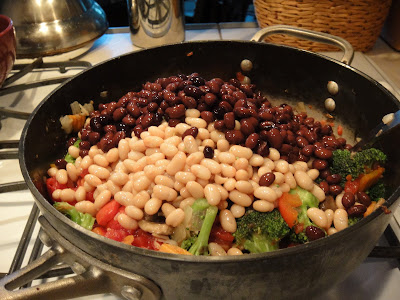 6. Add 1/2-3/4 cup red wine and spices. I used chili powder, coriander, thyme, cayenne sauce (sriracha), salt, pepper, cilantro. Bring to a boil and simmer for 20-30 minutes or until the veggies are cooked. Season to taste.

7. Garnish with cilantro, sour cream and cheese, if desired.

* Despite my dislike of food wasting, I also despise less than pristine produce or anything that may be close to expiration. I’m terribly afraid of food poisoning and will not risk it!

One Response to "Waste not, want not: Aka a recipe for Sunday Stew"