Lola first tried heroin when she caught her husband shooting up in the bathroom. Miguel first snorted coke with his cousin at age 13. Kelly’s sister got her hooked on smack after first trying it with their brother. For each of them, it took one taste, one try, then addiction.

I learned these stories at a methadone clinic in New York yesterday. I’m working with a research team to investigate cultural differences in how people use medication to treat substance use disorders. Basically, I’m talking to recovering drug addicts from various cultural groups to learn about their experiences taking medication to treat addiction. The idea is to reformulate the conception of addiction as a moral deficiency to one of a disease process like diabetes or asthma, conditions that require long-term treatment and sometimes, medication. 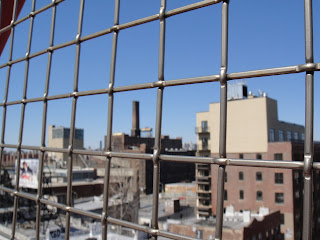 The project is daunting. Less so because of travel and time (although those are serious factors), and more so–as I learned yesterday–because the subject makes me so, so sad.

I heard stories of families, children, friends, jobs and health lost. I saw young bodies with the marks of old age. I met individuals disconnected from the world where people on the street treat them better than their close friends and family. I heard them take full responsibility for their actions, but still admit that they needed help. I learned what happens when help runs out.

I know the stereotypes and the statistics. Drug addicts lie, cheat and steal to get what they want. Indeed, the individuals I met yesterday talked about how they did everything from selling drugs to selling their bodies to get high. But I also know now the humanity. The man who stays clean for his 2-year old daughter. The woman who brings her sister to treatment. The man who confessed his drug treatment to a young cousin to keep her off the street. The group of 10 who took three hours of the day to talk with two strangers in exchange for a little gift card and pizza. The group of 10 who volunteer their time to help others. The group of 10 who felt heard.

You know what struck me most? When talking about what we could do to keep others from using drugs or to help users to get treatment, you know what they recommended? Telling stories. Stories of the pain, heartache, loss involved with addiction. Stories of rock bottom, detox and derailment. But also stories of recovery, of progress, of health.

So, I will try to tell you stories of the Lolas, Kellys and Miguels out there. And I hope these stories can help someone besides me at the very least.