Yesterday I spent 7.5 hours at Midway Airport in Chicago. The length of a business day. The amount of time it takes to drive from Sacramento to San Diego. The number of hours I’ve procrastinated on my paper this week. A long freaking time. 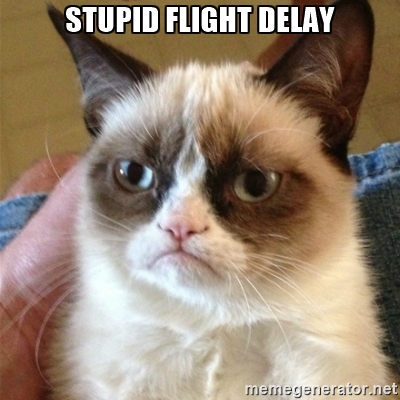 Now I admit to being a nervous traveler. As I explained last spring (see here), I like to get to the airport early. Settle in. Buy a coffee. Lately, write fieldnotes. Mostly, I’m terrified of missing my flight and the “doing research” thing has been a perfect excuse to get to the airport early. One never knows how long security screenings will take! But 7.5 hours? That’s a long time.
After finishing my fifth focus group, I found myself with five hours to kill before my early evening flight back to Cactus Land. Sadly, Chicago hasn’t gotten the memo about Spring, and I declined to walk around downtown in the pouring rain. Instead, I pretended to be a good little student and set up shop in the food court with enough academic journal articles to paper the runway.
I wrote and wrote and ate a sandwich and wrote and stared at people and wrote and took a lap around the terminal and wrote some more.
At one point, I was stopped by a passing TSA officer while walking around bleary-eyed (really, one can only concentrate on term papers for so long). As the people-mover whisked him away (whisk *might* be an overstatement), he yelled “What are you still doing here??!” and motioned me to stay put. Is walking a suspicious activity now? He made an abrupt about-face and headed my way, asking me what I was still doing here after all this time (you noticed?), where I was traveling to (why do you care?) and what I was doing in Chicago (nosey guy, aren’t you?). When he suggested I was attractive, I figured out that I was not being assessed for security risk, but instead pumped for information. When he asked me to lunch, I figured out that my productivity was about to be hampered. What to do, what to dooooo?

I begged off, citing my already-full stomach while flashing my wedding ring in an unsubtle fashion. I mentioned my homework and needing to find my gate. Smiling, I awkwardly trotted off. Did Mr. TSA find an excuse to walk past my boarding gate three times, yes? Did I try my best to pretend I was invisible? Yes. Did I meander to gates nowhere near mine and consider changing my clothes? Absolutely.

As time ticked by, I made my way to the appropriate gate 30 minutes prior to boarding. Color me devastated to find that my flight was delayed by 65 minutes. And after that hour passed, another 45. And then another 20. People huffed and puffed and hollered at gate agents. They slumped in chairs, splayed out on the ground, and sat dejectedly along the railing of the people-mover. We waited. We whined. We finally got on the damn plane.

For the second time in 36 hours, my travel was delayed by more than two hours due to a broken plane problem. Although I DEFINITELY prefer mechanical issues to be handled on the ground versus the air, ah hem, I found myself increasingly irritated at the inconvenience. Until I saw how the gate agents and flight attendants were treated… as if they had personally jacked up our plane and then commanded the sky to let out the floodgates. As if they were responsible for delayed flights and missed connections. As if they liked to see people upset.

I made a Twitter comment thanking our Southwest flight crew for handling the grumpsters to which a Twitter friend replied: “@BluestMuse did someone at Southwest threaten you with cement shoes or something unless you started saying nice things about them?”

As I explained earlier when folks suggested I might be sponsored or paid by Southwest because I didn’t trash them in interviews or on this blog, I really just appreciate the service. And especially so on days when I see crews working double time to deal with unhappy people.

Of course, that doesn’t mean that I don’t get irritated or that I can’t see the company (or any business) with a critical eye. For instance, I’m not exactly thrilled to read that the compensation for Flight 1919 (a plane that “Exited the runway” this morning) is exactly the same as Flight 812 (a plane with a 5-foot rip in the fuselage that caused an explosive decompression at 36,000 feet making us plummet towards the earth at 7,000 foot-per-minute*). It feels so petty to think “My fear was SO worse than their fear” because let’s face it, sliding off the runway would not be a good time. But it’s interesting to me that Southwest applies the same bandaid (a refund and two free vouchers) to every problem. Especially a problem that still gives me the shivers and a headache and impacts my ability to concentrate on life 25 days later. Eh, what do you do?

I know what I’ll do… Get back to my damn term paper that is due in 22 hours!

Have you had any “fun” travel experiences lately?

* While I would normally say “feet” per minute, pilot speak is “foot” per minute. Don’t ask me why.