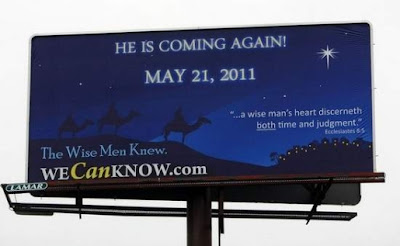 In high school, I remember sitting in a small classroom, in our small church school watching a small budget film that scared the daylights out of me. I’m talking about mortal fear here. The fear of being left behind. Damned for eternity. I’m talking about rapture and the movie “A Thief in the Night.” I’m pretty sure we were watching it during religion class and I’m pretty sure–even though our religion didn’t preach or condone rapture–that I was terrified for awhile, just in case. What if? What would it feel like to be left behind and to see my (much more virtuous) friends and family disappear?

Of course, these memories have come alive for me recently as today, May 21st, is supposed to bring the rapture (somewheres around 6 p.m. in some time zone that no one seems to know for sure but I’m guessing it’s wherever Harold Camping lives). The online commentary has made me chuckle.

In particular, I like Conversation Marketing’s “If Google Were in Charge of the 5/21 Rapture” and The Oatmeal’s (highly blasphemous) “How God is Handling the 2011 Rapture.” People have pointed out that the founding sponsors of today’s rapture are preaching end-of-times, but still soliciting sign-ups for their quarterly newspaper. Others have remarked how silly and misguided and ridiculous anyone who believes in rapture (or God?) must be. A friend on Facebook pointed out the hypocrisy of mainstream Christians mocking the Rapturers for believing today is the day while still believing in a rapture of sorts at some indeterminate time in the future. (Perhaps date-setting is the underlying flaw?) I’m reminded how easy it is to scoff at beliefs that are different than my own.

While I don’t buy the rapture bit and I do support people’s rights to believe whatever they want, I can’t help but feel a little pity for the Rapturers who (I think) will wake up severely disappointed tomorrow. As a member of the Seventh-day Adventist Church, I’m familiar with the concept of staking faith in an event only to find it never happens. The SDA church was founded after the Millerite movement which decided that October 22, 1844 was going to be the second coming of Christ. Clearly that didn’t happen and thus October 22 lives in infamy as the anniversary of The Great Disappointment. Can you imagine quitting your job, selling your possessions and getting ready for the Messiah, only to find he ain’t coming? I can’t fathom the anguish.

So while I will enjoy sarcastic commentary, and T and I shall surely make rapture jokes all day long (I’m still here if that tells you anything), I will also remember the real people who will be suffering today.