Confession: Fresh cut flowers make me sad. Although I adore them and indulge every so often, their ephemeral nature distresses me somewhat. How can something so beautiful and often so costly as a bouquet turn into a wilty, crunchy mess after only a few days? This mindset may be why I am prone to dry almost every bouquet I buy, and also why I was hesitant to use fresh flowers for our wedding last year. When planning, the thought of organizing flowers stressed me out because 1. They did not fit into the budget and 2. Given our July wedding, I knew I would end up with dead florals by the end of the day. (Truth: It was 103 on our wedding day!)

After perusing the internet for other possibilities–non-flower options, live plants, etc.–I ran across this post by Anna Alter at Painting Bunnies and the idea was born. Organza flowers. Organza bouquets. Flowers that would NEVER die!!

Making the flowers is fairly simple, but I cannot lie, extremely time consuming. What I learned early on about DIY projects: What you make up for in cost savings, you pay for in time. Still, with seven bridesmaids, seven groomsmen, three wedding fairy princess people, two junior ushers, a flower girl, a ring bearer, 130+ guests and separate ceremony and reception sites to decorate, it was the right choice for me. A piece of advice though: Start early. Start early. Start early. Do not procrastinate and assemble your bouquets a couple days before the wedding. Ah hem.

Here’s what you do…

First, gather supplies: Organza, matching thread, good needles, excellent scissors, candles and beads. The first step is choosing fabric. I shopped with my best friend Shannon and also with my mother after an unsuccessful trip to Joann’s* Fabrics where I couldn’t decide what shades were “right.” I started out picking up a few swatches of fabric to get started and truthfully, to see how difficult it was to sew. (If you aren’t sure, try remnants or pieces of fabric, which are cheaper.)

For each flower, I used at least two types and/or shades of organza for depth. I alternated between shimmery (expensive) organza and matte “bubble” organza, which was more economical. I’ve seen similar flowers with other fabrics such as netting or tulle, but it wasn’t in the vision for me.

Tip: Once you choose your colors, especially if they’re bright like mine, buy up ALL the fabric available. I bought during prom season and the bolts were one-time only orders. You might also want to buy all at once, if possible, so that there aren’t differences in dye lots. (This wasn’t a problem for me because I took a snow flake approach: Every flower is unique and different. ha!)

Do not forget coupons to retailers like Michael’s and JoAnn’s. Scour the local papers, make friends with people in other suburbs, and note most coupons are interchangeable between the two stores. Word to the wise: Martha Stewart’s magazine also runs a 15% off total purchase coupon to Michael’s.


Second, cut, cut, cut. Again running with the snowflake approach, the second step is to cut the fabric into concentric circles. At first I tried to be Type A about it, making everything uniform, until I realized that once you singe the edges, the mistakes don’t matter. Just vary the sizes according to your purposes, going for variety of large to small. I must have logged a thousand hours of TV cutting petals in the months prior to the wedding. At this point, you will understand why I said excellent scissors in the list of supplies. Sharp sheers with a comfortable grip are the priority.

Tip: I tried to vary shapes for different styles of flowers (see bottom left of the photo at right), but I found it cumbersome to cut and burn. You can definitely make different shapes though. See here for a tutorial, and play around a bit. 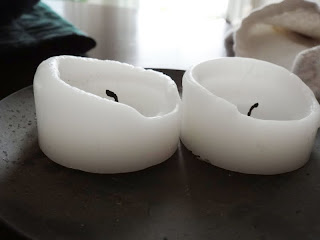 Third, burn ’em, baby. Gather your petals and and candles and find a marathon on TV. For me, it was Criminal Minds (had to balance out the wedding crazy, you know?). Next, simply singe the edges of the flowers to your desired level of edge curling. By singe, I mean hold the petal to the flame, turning it round to melt the edge of the fabric. This happens quite quickly, so take care not to hold the fabric too close to the flame or for too long. I lost many a good petals to the fire!

I did the majority of my singing on the couch and quickly wound up with an aching back and arm from leaning onto the coffee table. To develop a more ergonomic (but slightly precarious) burning set-up, I put my candle on a jelly roll pan and set it on my lap. 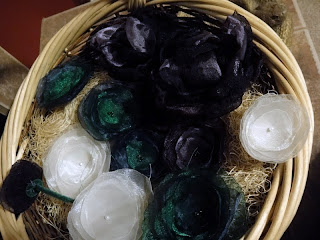 Tip: I found cheap, wide, unscented candles to work best. When burning, watch out for draft-causers like ceiling fans or air conditioners. Flickering flames will give you an uneven singe.

Fourth, stack and sew. To assemble the fleurs, simply make stacks of petals, stitch a few times and finish with a bead or two or three. I played around with different color combinations, shapes, thicknesses, sizes, etc. The best part? If one looks wonky, simply remove the stitching and start over!
For the majority of flowers, I used two-three beads for each center. I added extra bead bling to my bouquet as you see below. 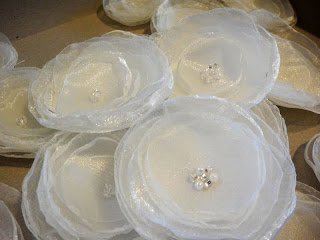 Tip: For a cleaner look, insert the needle a couple petals into the stack (instead of directly from the bottom) to hide the knot. As you stitch back, run the needle all the way through the stack to grab the last two petals. (Note: I have no idea if that makes any sense!)

Fifth, assemble and decorate. Part of the trouble I had was trying to get the flowers into usable form, especially in the bouquet realm. Through a lot of trial and errors, and a lot of hard work on my mom’s part, we figured out how to transform 1,000+ fleurs into four barrettes, three wrist corsages, 9 bouquets, 13 boutonnieres and 16 wreaths. Whew.

One of these days, I’ll open an Etsy shop with cute hair accessories. Until then…

*Is there some sort of sewer’s club I’m not aware of? I always feel like an outsider at that damn fabric counter!

6 Responses to "DIY wedding fleurs: How to make organza flowers and bouquets"