A couple weeks ago I wrote about Mr. T’s newest aviation obsession: formation flying (see here), aka several aircraft flying coordinated missions and maneuvers in close proximity. To write about it is one thing. To experience it? Quite another, as I found out this past Sunday.

We ventured to the airport to meet up with the other pilots, the ones who would be flying around us, right up close and personal with us, too close for comfort for some of us. Yeah, I admit jitters. One of my jobs as passenger/map holder/provider of in-flight entertainment is to keep an eye out for air traffic. How was I supposed to keep myself from shouting “TRAFFIC!” every 45 seconds when flying nearby the guys?

I felt a little better after observing the pilot briefing and training session. As Lead, T reviewed past flights and talked in great detail about what everyone should work on and what maneuvers they’d be flying. Hand signals were reviewed and I realized–for the first time, despite authoring the article a couple weeks ago–how much the success of the flight relies on the briefing and everyone being in sync on the ground.

In the air, almost all of the communication takes place via hand signals and airplane movements, and pilots must understand what every one means. It’s imperative, for instance, that the pilots know the difference between a raised fist (a wingman cross-under) and a fist pump (an element cross-under), or wing-rocking (return to finger-tip formation) and a tail-waggle/kick-out (go to route formation). Misunderstanding a signal could prove deadly if it caused a mid-air collision.

Every piece of the formation flight is planned out and synchronized from engine start-up to taxi to take off, in-flight maneuvers, landing and shut-down. Lots to know and remember!

T led the guys through basic turns in finger-tip formation and close trail, extended trail, cross-unders,  echelon turns, breaks, re-joins, route formation, route turns and an overhead approach. I could explain what those mean, but it’s easier to watch! Check out video of the flight–raw, uncut video from yours truly who never claimed to be a videographer so be kind–by clicking here and here. You’ll see all of the above maneuvers plus hear the result of a roll.

After our mission, the guys de-briefed extensively and then went up for another flight. Yours truly was still queased out and watched from the ground. 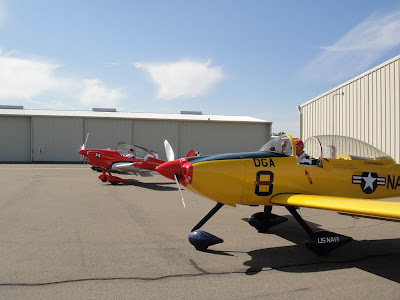 Despite the nausea, I had a blast! I’m looking forward to going up again soon, hopefully when T is not the lead so I can get different visuals.

Not a bad way to wrap up a weekend!

One Response to "Green gills and formation flying skills"