When Mr. T and I were auditioning caterers for the big day (arguably one of the most fun parts* of wedding planning), I was surprised to find that my idea for cost cutting–serving “heavy” hors d’oeuvres–was just as expensive as a regular meal. After whipping up baby bites for a small scale shindig recently, I now see why. Those suckers take a lot of time and handwork. Not surprisingly though, they are worth it, especially when following recipes from The Pioneer Woman.

I thank/blame my sister Emily for introducing me to The Pioneer Woman’s blogs, cookbook and flavorful recipes. What I appreciate, in addition to the humor and easy-to-follow instructions, are the photos. For most recipes, she gives step-by-step photos of the process which is helpful for inexperienced chef types. She also offers great ideas for every meal under the sun and is (perhaps) entirely responsible for my pants not fitting lately. Ah hem. As you read the recipe reviews below, you’ll see why!

Did you know that one of the only plants that can survive under oak trees is the veritable drought-resistant rosemary bush? While gorgeous, oak trees are a pain. They don’t tolerate water near the roots. They spit down acid droplets in the spring, acorns and leaves in the fall, and oak balls/galls** whenever they damn well feel like it. We are blessed with five trees on our property which means lots of rosemary.

When I found this easy appetizer, I thought what better way to deal with my abundance of the pungent herb? Easy but time consuming to make, these balsamic-laced anti-pasti skewers were a major hit! I made a vegetarian version with grape tomatoes in place of the salami, too. Click here for the step-by-step version. Next time, I’ll make these in advance so the ingredients have time to infuse with rosemary. Also, when serving, don’t be like me and slop vinegar on your white table cloth. Oi.

Want happy party people? Serve poppers. And not just any poppers–bacon wrapped jalapeno goodness. I know what you may be thinking: They’ll be too hooooottttt. Well, so long as you scoop out the seeds and membranes real good (yes, I said that), you should be fine.

I won’t lie though. These things took forever to put together as you must wash and slice the jalapenos, then scoop out seeds and membranes, then fill with cheese and then wrap with bacon.  And then cook. The process is worth the wait, however. (Remember this post about patience?)

The original recipe is here. I modified it a tidbit to include shredded cheddar cheese (similar to her cookbook version), which gave the poppers some depth. I may also include chili powder next time, just for fun.

Words of advice:  Wear gloves and eye protection when working with jalapenos. I had several eye-squirt instances and my trusty onion-cutting goggles saved me from blindness. Additionally, grill on a rack over a foil-covered cookie sheet like you see above. I made one batch directly on foil and the jalapenos turned a bit mushy and stuck to the pan. Also, if you find that the bacon isn’t crisping up but the poppers are clearly done, broil ’em for a minute or two. 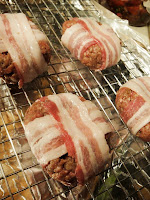 One of my favorite foods on the planet? Cheeseburgers. Even better? MINI cheeseburgers. (Is anyone surprised that my pants don’t fit lately?) Connoisseurs of sliders, T and I tend to sample them whenever possible. (T also sings about them, having at one point memorized the Jack in the Box mini sirloin burger song)

This recipe (see here) definitely holds up to any restaurant variation I’ve tried. And the great news? They don’t take forever to make. The photo below shows them on slightly-too-big dinner rolls but some bun companies are now making slider-sized versions, too. Enjoy!

Apparently I am a mushroom fanatic as I just realized that we’ve been through at least 17 extra large Costco containers of shrooms since I got home from Phoenix a month ago. I put them in stir fry, soup, sauce, salad and over steak. I just can’t help myself! And, prior to finding this recipe, I discovered (regular) mushrooms are a healthy habit–full of vitamin D and antioxidants.

A perennial party favorite of mine is the stuffed mushroom. I usually do a traditional stuffing of shredded onions, celery, mushroom stalks, bread crumbs and cheese, but it’s work intensive like everything I make apparently. Thus, I was seduced by the ease of this version (see here). Just saute parsley, garlic and onions with a splash of white wine, pour over brie-stuffed mushrooms and bake. Simple, easy, delicious.

Sadly, I found them a little too simple. Next time I will kick up the stuffing with some cayenne and perhaps elevate them in the dish as I found them to be swimming in a soup of butter and mushroom juice when pulled out of the oven. Not bad, just messy. Comparatively, I liked the French Onion Soup Stuffed Mushrooms better in terms of flavor.

Now that I’m starving again (even though I just finished lunch), I’ll leave you. Go forth, appetize.


* Second only to cake tasting. If you’re in the market for a wedding cake and live in the Sacramento region, visit Ettore’s. Astronomically priced but the cakes are out of this world!
** T and I have bet on the proper term and we are both correct apparently.