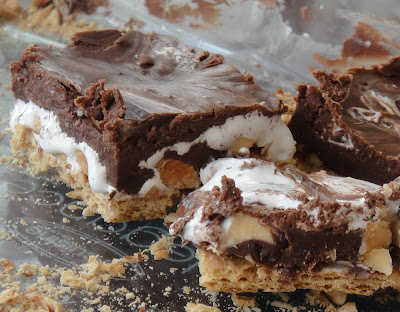 Looking for something that’s ooey-gooey, chocolatey, crunchy yumtastic? Look no further: Rocky Road Bars. Originally from grande dame, Martha Stewart, I found these bad boys on my new favorite food blog, Baked Bree. Bree offers step-by-step how-to pictures, so visit there when you get to the final stages. Not only are these bars delicious and a hit with crowds, they’re relatively simple to throw together. I did a double batch in 45 minutes. To save time, buy pre-roasted almonds.

To convince T that these bar were “not that bad” in the nutrition category, I’ve rationalized every ingredient. Grahams = fiber. Almonds = protein. Condensed milk = dairy/protein. Chocolate = antioxidants. Marshmallow fluff = fat free. Can you see why my pants STILL don’t fit?

1. Start by toasting some almonds. 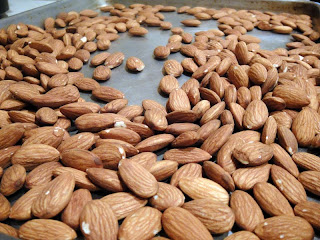 (Shortcut, buy pre-roasted). Toast almonds in a single layer on a rimmed baking sheet, oven set to 350, for 10-15 minutes. Stir or “shake” almonds every few minutes. You’ll know they’re done when they start to smell like heaven and turn brown(er). DO NOT let them burn. If you do, just start over. Trust me. Alternatively, you can toast them in a frying pan for 3-4 minutes or in the microwave, but I’ve never tried that. I toasted a double batch so I have some on hand for other recipes. After toasting, and eating a fistful, roughly chop.

Line a 9×13 dish with grahams. Now, Baked Bree called for a lining of parchment paper and then the grahams. After making my bars, I see why. The parchment will allow for much easier cutting after they set in the fridge. However, my parchment paper was unruly and I tossed it. (Patience is a virtue I don’t have, remember?) Anyway, toast the grahams for 7-8 minutes in an oven set to 375 until they’re golden brown and their fragrance fills your kitchen and you have an irresistible desire to start a camp fire and roast a marshmallow. (Seriously, I wouldn’t joke about these things.) When they’re done, remove from oven and sprinkle with toasted almonds. 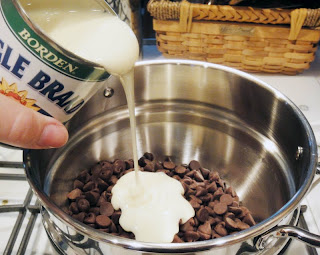 Don’t be like me and start this process before you’re done with the almonds. Instead, do it while your grahams are almost done browning. (Live and learn!)

In a double boiler (basically a pot nestled in another pot full of simmering water), melt the chocolate chips with the sweetened condensed milk. (Again, NOT evaporated milk. Don’t be like me and ruin your dessert!) Stirring occasionally, it’ll be done when the mixture is smooth.

After you’ve toasted the grahams and sprinkled them with toasted almonds, put dollops of marshmallow fluff on top. Two things: 1. Leave some spaces of graham visible when you sprinkle almonds so that the chocolate and marshmallow adhere well. 2. Run your spoon under hot water before dishing out the fluff. It’ll come off much easier that way (as I read on the jar after I was done).

Pour the chocolate on top of the marshmallow fluff. Now, as I found out, it’s unwieldy to hold a hot double boiler pan and distribute fudge evenly, but try. Because I didn’t evenly cover the pan with chocolate, I didn’t get the uniformly pretty swirls like Martha or Bree (shocking). Happily, aesthetics do not change the flavor one bit! Anyway, after you’ve poured the chocolate, take a knife and swirl the marshmallow through the chocolate (see here for a good picture). Work quickly as it does set up fast. After swirling, chill for at least an hour. Cut, serve and watch them disappear. (Mr. T took these to work and said they were a huge hit!)