After traversing the airport trying to get boarding documents, I gratefully bypassed the backed-up security line in favor of the frequent flier “fly-by” lane. Believe me, I and my fellow short-line standers were immediately popular with the restless crowd. With at least 75 people waiting, I watched a single security agent slowly checking IDs for people to enter one of but two screening lanes. I, of course, picked the slow line.

My TSA “massage” aka advanced pat-down* didn’t do anything to cure the dull migraine I’d been nursing since Saturday, and I schlepped into the terminal to await my plane.

Somehow, despite what the crowded gate area portended, I secured a window spot next to a nice fellow and our middle seat remained vacant. We waited and waited for the flight attendants to close the door–the universal signal that we “made” it and no one else would be running onto the plane and sidling into “our” extra personal space. But it didn’t happen.

The door didn’t close. Our departure time came and went. Finally, about 30 minutes after we should have been airborne, the pilot piped up to say that due to a security breach, the TSA shut down the entire airport. Apparently a TSA agent let through a passenger holding an expired license… How they knew that after the fact and subsequently found said person is beyond me.

Anyway. Three more souls boarded the aircraft but the gentleman on the aisle was sufficiently scary enough to direct them to the seats just forward and to the left of us. And I will say: Praise the Lord.

About 20 minutes into the journey, just before the flight attendant started bringing around beverages**, the middle seat passenger across from us started heaving. And wretching. And tossing everything she’d ever eaten into at least seven plastic garbage sacks.

I watched the passengers behind her hurriedly snatch up their  purses and backpacks from under her row of seats, and the people on either side of her not-too-quickly vacate the row. Miraculously, my friend and I still didn’t get a middle seat companion and we not-too-quietly congratulated each other. When you fly every week, it’s these little things that matter, okay?

Thankfully, no one had sympathy-vomiting and we made it home just about an hour behind schedule.

As for me, THIS is how I recovered: 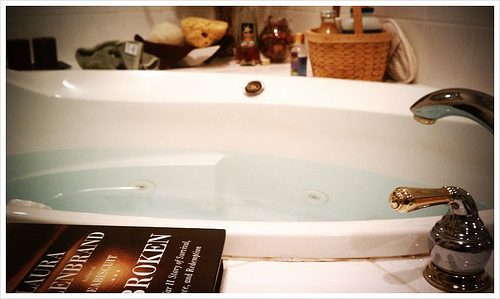 * I choose to “opt out” of advanced imaging technology. More on that later.
** Which is when everything happens apparently!

One Response to "The Daily Pixel #47- The antidote to extended, puke-ridden travel"