“Two to three weeks,” he said.

“Bathrooms are small and easy,” he said.

And the universe laughed.

We’d had “tile the bathroom” on the to-do list for years and years thanks to the death mold growing on the lovely carpet the original builders installed underneath a leaky shower door.

Mr. T and I spent AGES interviewing contractors and trying to decide if we were just going to do the tile, or if we wanted to be more ambitious and fix the shower as well, or if we wanted go whole hog and redo all the things. It’s just (buckets of) money, right? Eventually, the desire to have a shower that was big enough to turn a circle in without elbows knocking open the door won out, and we found a crew to help us.

Initially, we planned to start construction after Christmas, since the contractor was booked solid until then. We’d have time to pick out tile and argue about fixtures. But a cancellation meant his schedule was suddenly open for a few weeks in early September. I’d just written this post about reclaiming my time and thought “Why not? Early semester is probably a fine time to get this done.” [Can you hear all of the other teachers/professors of the world cackling?]

And so, we got started. And by got started, I mean, dudes began demolishing the old bathroom and we had to start picking out materials ASAP.  Oh, and did I mention this was 16 days before I threw T a huge 50th birthday bash? Apparently I thrive on pressure.

At first, things progressed at a nice clip. While the crew demolished our bathroom, I spent way too much time looking at tile and stressing out about coordinating colors and patterns. T and I argued about whether to use the vintage exposed thermostatic shower fixture he’d had in the attic for a couple decades. And once we’d agreed on the fixture, we had to battle whether to try and match the brass, or do mixed metals. Although T and the contractor initially disagreed with me about mixed metals, Shawna and the power of Pinterest prevailed as you’ll see below. We quickly picked out fixtures, tile, paint, and granite, and each day I looked forward to coming home from work and seeing how much the space had changed. 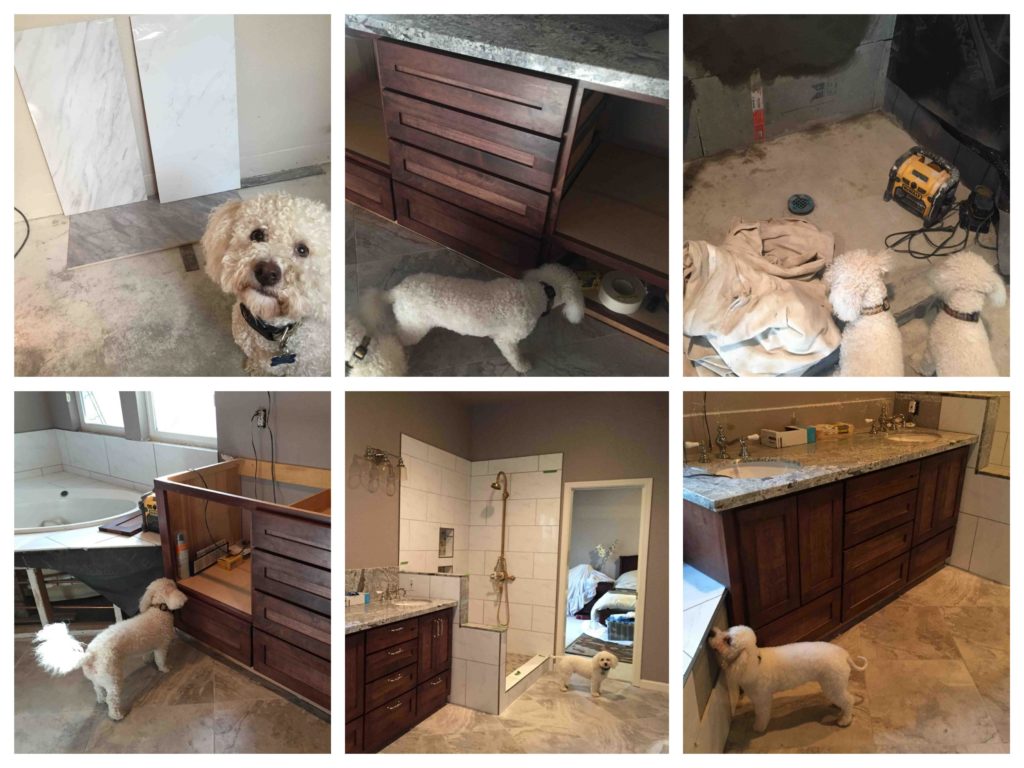 Somewhere a few weeks in, progress started to stall. I won’t bore you with the MONTHS of details, but after the demolition, it felt like everything that could go wrong did. There was the new wall we needed to change, a flooring replacement, and “Granitegate 2018.” When friends would ask early on, I’d joke that the job that started right after Labor Day might be done by Halloween. Then Halloween turned into Thanksgiving. Then Christmas. By New Years, I figured I should stop making joke predictions or it would never be finished.

Thankfully though, we wrapped the project just after the new year and we’ve been enjoying the luxurious, death-mold-free zone ever since.