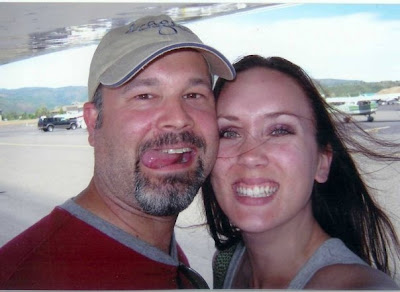 Originally, Mr. T and I were planning the wedding for July 25 until we looked at a calendar realized the EAA Airventure fly-in at Oshkosh would be starting July 26. I know this might not mean anything to you, but it’s one of the biggest (maybe THE biggest?) fly-ins in the world and at least a dozen of our favorite people (groom included) would be going. As I did not relish the thought of 1. Having 12 less of my favorite people in attendance, 2. Spending my honeymoon in Wisconsin or 3. Being left out of the Oshkosh fun for the third year in a row, we pushed the date up.

With a week between the wedding and the Kosh, we tried to come up with fun/affordable/”us” honeymoon ideas and came up short. Until we got creative. We thought that a “hopscotch honeymoon” might be in order… pack up T’s plane and hopscotch around the country, making our way to Oshkosh and back. While this doesn’t have the same ring to it as fruity drinks on a beach in Maui, my flying-adventure-photography-history loving buttons are pushed!

To figure out itineraries, T and I are each working on proposals that we’ll reveal to each other this weekend (I hope!). I think it was supposed to be secret-ish, but I had to share some of my plans with T because 1. I can’t keep a secret when I’m this excited and 2. I needed navigation help. (Originally I was trying to cover the entire U.S. in three days. Doable but not exactly honeymooning fun.) 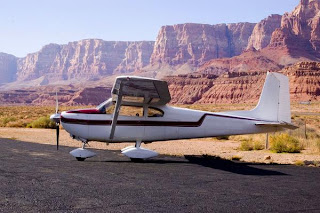 And SO… I’ve worked up a southerly proposal that will take us down to the Nevada, Arizona, New Mexico, Colorado regions before pointing us north toward Kansas and eventually Oshkosh. The pièce de résistance? MACKINAW ISLAND!!!

T showed one of his cards last week when telling me about a friend who keeps a summer home in Michigan. I’m fuzzy on the details of whether T brought up Mackinaw Island or the friend did, but in any event… I’m headed Somewhere In Time, my pretties! Thanks to T, one of my favorite romance flicks is the Christopher Reeve/Jane Seymour tale where the boy goes back in time (literally time machine style) to fall in love with the girl. Setting? The Mackinaw Island Grand Hotel! Highlights? Beyond the beauty and history, there are NO cars allowed! I’m thinking a horse and buggy will be picking us up at the airport. I love it!

I really must get back to my homework now, but before I do, I should mention one more cool feature of this hopscotch honeymoon. It will take me three states closer to my goal of visiting all 50! I’m currently hanging out at 38 states, and with New Mexico, Wisconsin and Michigan (technically), all I need to do is hit the Eastern seaboard above Pennsylvania (minus NY) and Alaska. Woo!