It wasn’t too long ago that Mr. T asked me an intriguing question: “Do you think people still see the age difference, or do you think they just see us now?” I remember getting ready for some event when he asked, maybe dinner or an outing with friends. I recalled the comments and jibes about our ages over the years. (I’ve stayed a zygote in my mid, now late* 20s) and he’s maintained a midlife crisis apparently.) But I thought… I think it’s been long enough that our friends just see us now. I hope so anyway. 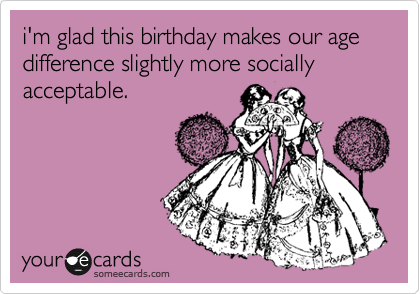 The question reminded me of starting grad school at Sac State in 2006. When my new friends heard of the age difference between me and T–13 years, 9 months, if we’re being particular–they were immediately put off. They made conjectures about us, of course. Why should I need to date an older guy? What daddy issues must I deal with? And T, a divorcee? Must be damaged goods that one. Wonder what she sees in him. Is it the money?
If you think I’m just speculating, no, later my friends and I talked about it. After they met T, they realized what a fabulous human being he is and how well we get on together. My friend Chris said something like, “We really wanted to hate him, but we just couldn’t.” Four years later, I still count most of those judgers among my nearest and dearest. It’s normal to recognize differences and process them I suppose. We all judge and speculate about things out of the ordinary. I figured it would be the same for the rest of our friends and family.
Well, as a few people of my acquaintance have recently written me derisive messages about “marrying the old man,” I’m guessing that the age difference is still readily apparent. And irksome.
I wonder why. I know 14 years is a wider span than many, but we’re not into Anna Nicole territory by any means. And even if we were… (okay, no, that’s still gross). What I mean to say is that who cares how old or young we are, or what we look like, so long as we love each other? Isn’t that the important part of the relationship equation? Even if I wasn’t born middle-aged (which I was) or if he didn’t act 22 (which he does), if we have love and respect and kindness and FUN, who cares?
If you do care for some reason–about age differences, or skin color differences, or ethnicity differences, or class differences, or size differences or religious differences–why?
xoxo,
shawna
* OMG!

5 Responses to "On marrying an “old man”"