Scene: A large “luxury”* apartment complex two miles Southeast of a ridiculously huge university** in the Southwestern United States with a reputation for partying.

12:05 a.m.- Crawling into bed. My roommate and his friend laugh boisterously at the TV. I hope sleep will claim me soon as the alarm is set for 8 a.m. Must get work done tomorrow!

2:18 a.m.– A shrill female voice shouts from the stairs below as she has around 2 a.m. for the last few nights. I thought she fought with her boyfriend frequently, but I think she may be walking one or more of the three large dogs she hides in the apartment… unless “hurry up! hurry up!” is something she feels compelled to yell at her boyfriend during the wee hours. On the stairs. Hrm.

5:21 a.m.- A male voice hollers in the parking lot and I immediately think of the cretins on the second floor (see above). The voice isn’t angry. Definitely drunk, but not in fighting-mode. Pleading mode perhaps? Pleeeaaassseee shuuuuttt upppppppp.

5:26 a.m.- The drunk jabber continues until I am compelled to peak out my third-floor window. Must make a positive I.D. of the second floor fiends for when I call the apartment manager tomorrow. Oh, just fabulous. The drunk yeller and two of his compadres stand on either side of a large extended cab truck, sparkly rims glinting under the street lamps. They seem peeved at the driver, yelping and pounding on the windows. The driver does not, despite protestation, get out. Instead, he or she violently backs out of the narrow, narrow parking space, thankfully missing the neighboring cars of which mine is one.

5:28 a.m.- Not to be dissuaded, the loudest carouser jumps onto the hood of the truck, holding on to the windshield wipers while the vehicle moves forward and backward to shake him loose. Meanwhile, the other two brats continue to pound on the truck and bellow.

5:29 a.m.– Shaking off the miscreant, the truck peels away. Mr. Ringleader continues to lament the leaving of the truck, but in the amused “Now wasn’t that fun?” tone that only a drunk person without a clue of their surroundings can manifest. Sidekick One giggles, “I think I broke my hand” while Sidekick Two urinates on the wall. Together they run, laughing, to another building.

5:30 a.m.- The title for this post pops into my head. Wide awake, I will myself to sleep for a few more hours. 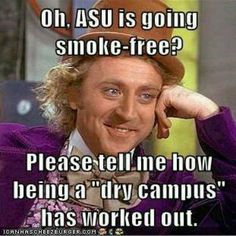 While I am well aware that the above scene could take place anywhere, including at small liberals arts colleges in small little towns (with nuns and 8:00 curfews), I am convinced the frequency is greater near party schools like the large Southwest university that I attend. And lest you think I’m a prude, I am not necessarily against having a good time. But I am a fan of being a good neighbor, and sleeping, and letting your neighbors sleep, and being SAFE, and not throwing up or urinating in the parking lot. Kids these days!

* Luxury in this instance means semi-vaulted ceilings, faux granite counter tops and black appliances. Oh and a gate that apparently does not keep out the rabble. It merely contains it.
** In academic writing, it’s common to make anonymous the university or organization you research.