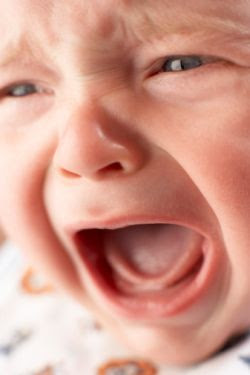 I like babies as well as the next person. At this point in my life, I smile at ’em, play with ’em, make ’em scream and hand ’em back to their parents. It’s a fantastic system. All the cuteness, none of the dirty diapers or temper tantrums or responsibility stuff.

Aside from planned encounters with my nieces and nephews, or periodic peekaboos in the grocery store, most of my experience with babies lately is on airplanes. Screaming fussy poo machines in a contained space 36,000 feet above the earth. Fun times.

I’m guessing you’re waiting for an anti-babies-on-planes rant. Keep waiting. Although I’d be an avid supporter of a babies “section” in the airplane… preferably in the back with some sort of sound proof plexiglass partition (maybe like the nursery room in church?), I’m actually writing to say: Give parents (and babies) a break.

Yesterday I watched this woman across the aisle nearly get whip lash from repeatedly wrenching her head around to glare at the parents of a screaming infant during the final descent. The kiddo was maybe a month old. Like it or its parents had any control over its behavior. I see anti-parent sentiment in the airport all the time. Sideways glances at the mom pushing a stroller with an overflowing diaper bag. Terrified I-hope-they-don’t-sit-near-me expressions during boarding. Sighing and grumbling about little ones crying. I admit, I don’t exactly get excited when a family follows me on board and sits nearby, but I understand what is in a parent’s power to control and what just isn’t. I find that if I don’t sit and stew about things I have no hope of changing, I can zone out easier. (Now, reacting to parents of obnoxious children in the I-can-control-my-behavior-but-choose-not-to age ranges is a different story!)

So my babies on planes public service announcement: Please, be kind people. Traveling with kids is no picnic and from my hundreds of hours observing, parents get just about no help in the airport. It’s tough enough to get through security, keep track of belongings, shuffle from gate to gate and keep sanity without adding in pint-sized people to care for. Consider offering words of support, helping to stow baggage, retrieving tossed toys that end up just out of reach, etc. I think a little compassion might go a long way.

Parents, you might also consider Mr. T’s suggestion: “Aren’t you supposed to ship the babies ahead of time?” I’m sure a Fedex sticker would look just charming slapped on a diapered behind. ha!

P/S Not actually being in The Motherhood, I’m curious if these observations are on the money and if my suggestions would actually be of value. Parental types, what do you think?

7 Responses to "Babies on planes. A public service announcement."