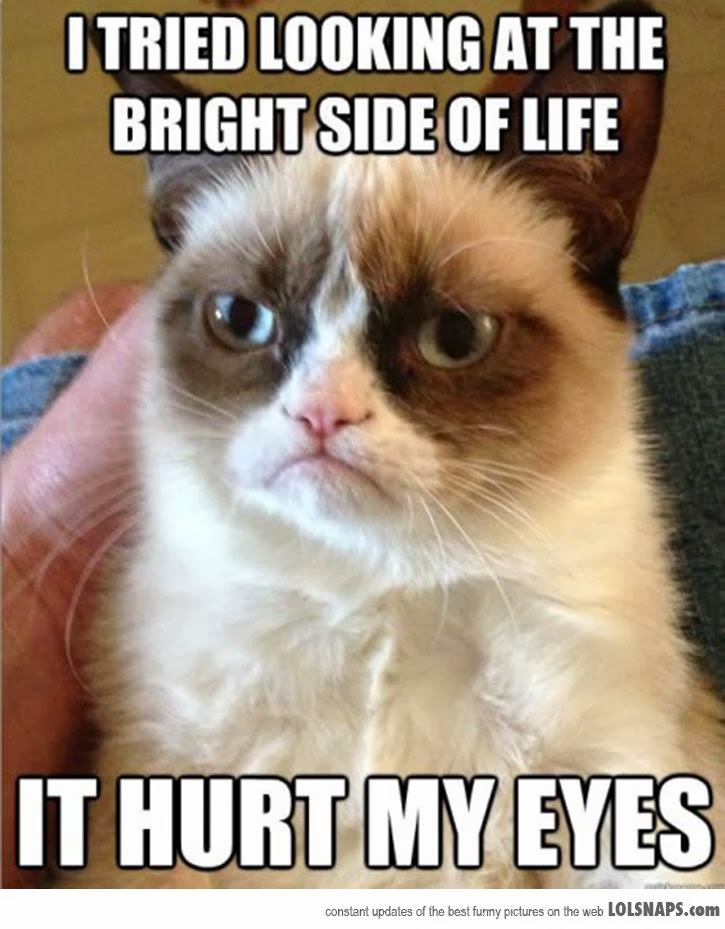 Chest heaving, I lay on the floor, clutching a knee and half-crying. I’d just tumbled head first into a stack of plastic boxes and crashed… for no apparent reason beyond a malicious strip of carpeting jumping out to spite me.

A few hours later, as I whined about the fall that broke the boxes and left my knees scraped up, my stressful work week, the wardrobe related consequences of mainlining rocky road ice cream, the un-taken flying test, the un-flown flight hours, the un-written papers, the un-attained dream job, Mr. T hugged me.

When I refused to be comforted (hey, I like to wallow) he started singing. Yes, singing:

“Alwayssss look on the briggghtt side of life!”

And I was nearly moved to violence.

And then he played me the Monty Python tune:

And while I did laugh eventually–mostly at T’s endearing efforts to cheer me up–I got to thinking about bright-siding. You know, the concept of silver linings and finding the bright side in ugly situations?

I wrote about bright-siding a few years ago when I shared an office with a friend who studied positivity and communication (see “I think happy therefore I am happy?“). He told me about research that suggested that by engaging in positive self-talk, we can trick our bodies into feeling better and thus reduce our stress. We can literally talk ourselves into feeling better.

I buy that to a certain degree. From studying emotion theory, I know that we can think and talk ourselves into feeling emotions. (For example, replay a recent heated argument or relive an embarrassing moment. Maybe you can call up the feelings of those situations even hours, days, years later?) It turns out, consistent focusing on the negative can generate some ugly health consequences (I’m talking cardiovascular issues and production of the stress hormone cortisol that jacks your immune system.) Ruminating and dwelling, especially on things outside of our control? Extra bad.

But, at the same time, I’m truly tired of being bright-sided. Or at least, bright-sided too soon. When something bad happens, or when the annoyances pile up, I think it’s healthy to acknowledge those feelings and live with them for a bit. (Indeed, part of being resilient isn’t simply burying or ignoring difficulties, but acknowledging and overcoming them.) When someone wants me to “just get over it” or (especially on Facebook), gives me the “Well it could have been worse…” or “You should be grateful…” I sort of want to scream.

While I absolutely do appreciate people (especially my really calm and logical husband) who can help me gain perspective, I want that after I’ve had a chance to wallow, grieve, scream, whatever. Mmkay?

P/S I read Barbara Ehrenreich’s “Bright-sided: How the relentless promotion of positive thinking has undermined America” a few years ago. And while the details are hazy, I do remember strongly disagreeing with her major claims and pessimism over the emphasis on positivity in American thinking. I just might have to re-read and review that book one of these days!

5 Responses to "Stop bright-siding me"