Yep, I’m one of those insufferable souls who read a lot last year. My grand total for 2020 included 104 books, a mix of fiction and non, leaning heavily towards critical and complicated. Most were audiobooks, consumed on endless walks around the block with my dogs or puttering around the house, since there was little better to do during quarantine.

I detailed the first half in my mid-summer 2020 Reading Report and will now share the remaining 50, starting with my favorite non-fiction reads. 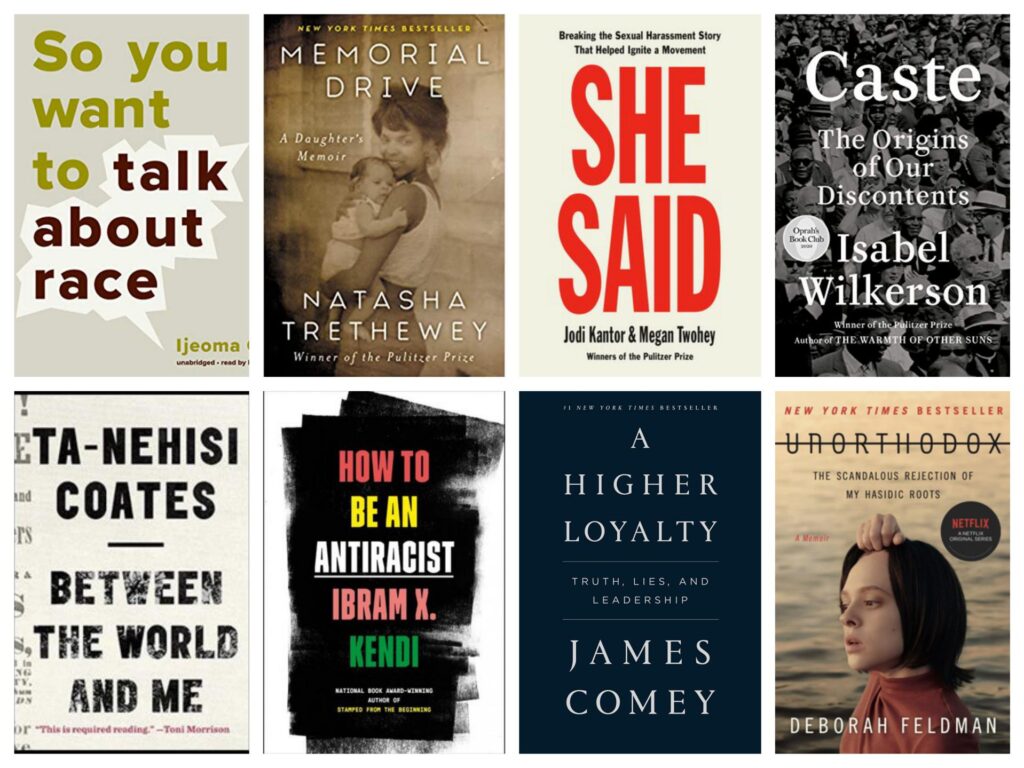 Like many who read accounts of the devastating murders of Breonna Taylor, George Floyd, Ahmaud Arbery and too many others, I spent the summer expanding my anti-racist vocabulary and continuing to learn about the difficult history of the U.S.

If I had to pick a best book of the year, I’d probably vote for Isabel Wilkerson’s Caste: The Origins of Our Discontents. In the book, she compares the ancient caste system of India, Nazi Germany, and the United States to argue that U.S. culture is predicated on a caste system. As an organizational scholar, I appreciated her culture/institutional-level analysis that explains the deeply personal and painful experiences of racism.

It’s a heavy but important read, full of devastating examples of how caste plays out in the U.S. Many instances I’d known of from other reading, but I was intrigued/horrified how caste shapes elections/voting, as well as how the Nazis developed their playbook by looking at U.S. anti-miscegenation laws and practices… sometimes deeming them too violent or grotesque. (That blew my mind… the **Nazis** finding our practices too violent.) The book also deftly explains the “karen” phenomenon of white women feeling compelled to report on Black activity. The book ends with a surprisingly hopeful message that I will try to hold on to though.

A close second was Ijeoma Oluo’s So You Want to Talk About Race. It’s a difficult but important read with numerous practical communication tips, as well as more philosophical advice about discussing race. White folks, this is one we all need to read and then read again.

An important part of evolving my antiracist thinking and expanding my empathy over the last many years has been experiencing the stories of people from other cultures. Three incredible stories this year included Ta-Nehisi Coates’ Between the World and Me, Natasha Trethewey’s Memorial Drive, and Ibram X. Kendi’s How to be an Antiracist.

Coates’ book is framed as a letter to his teenage son, and is a brilliant and painfully raw message about the brutality and cruelty of racism in the U.S., particularly for Black men. I strongly recommend you listen to the audiobook, which is read by the author. It’s lyrical and beautiful. Ditto for Kendi’s book. I appreciated learning his story of evolving antiracist thinking, and especially his focus on antiracism at policy and organizational levels. Trethewey’s book is a Pulitzer Prize winning personal memoir focused on her life and how she survived her mother’s murder. As a former poet laureate, Trethewey deftly weaves together themes of grief, love, trauma, motherhood, with the tensions of racism. It’s a stunning and intimate book.

Also intimate, but quite different in tone was Deborah Feldman’s Unorthodox, which tells the story of her life in a Hasidic community, and how she eventually rejects the religion. I appreciated the inside look into the ultra conservative community, although as with most conservative religions, many of the practices seemed misogynistic and troubling to me, especially keeping girls from receiving education. (Feldman’s journey to college reminded me of Tara Westover’s Educated.)

And if ever there was a book that inspired rage, it was Jodi Kantor and Megan Twohey’s She Said, a Pulitzer Prize winning story of breaking the Harvey Weinstein scandal(s). The book describes how the authors’ journalism helped advance the #MeToo conversation about workplace sexual harassment and assault. I was utterly captivated by the behind-the-scenes descriptions of the reporting process and especially, the high personal and financial stakes faced by the women who shared their harassment stories. The book also gave insight into Christine Blasey Ford’s experience testifying about her sexual assault by Brett Kavanaugh, and the personal and political consequences of sharing her story. It’s a powerful book albeit one that’s stoked so much anger, angst, and sadness, I want to scream, especially for Blasey Ford.

And continuing my theme of rage reading, I listened to James Comey’s A Higher Loyalty: Truth, Lies, and Leadership. I tried to skip it every time the Libby app recommended it to me, but after watching the Netflix adaptation, I decided to give it a go. I appreciated the greater insight into Comey’s role at the FBI and generally important perspectives on leadership, but man, learning more about the corruption of the current administration did not do anything to improve my pandemic mood. Still, a good read. 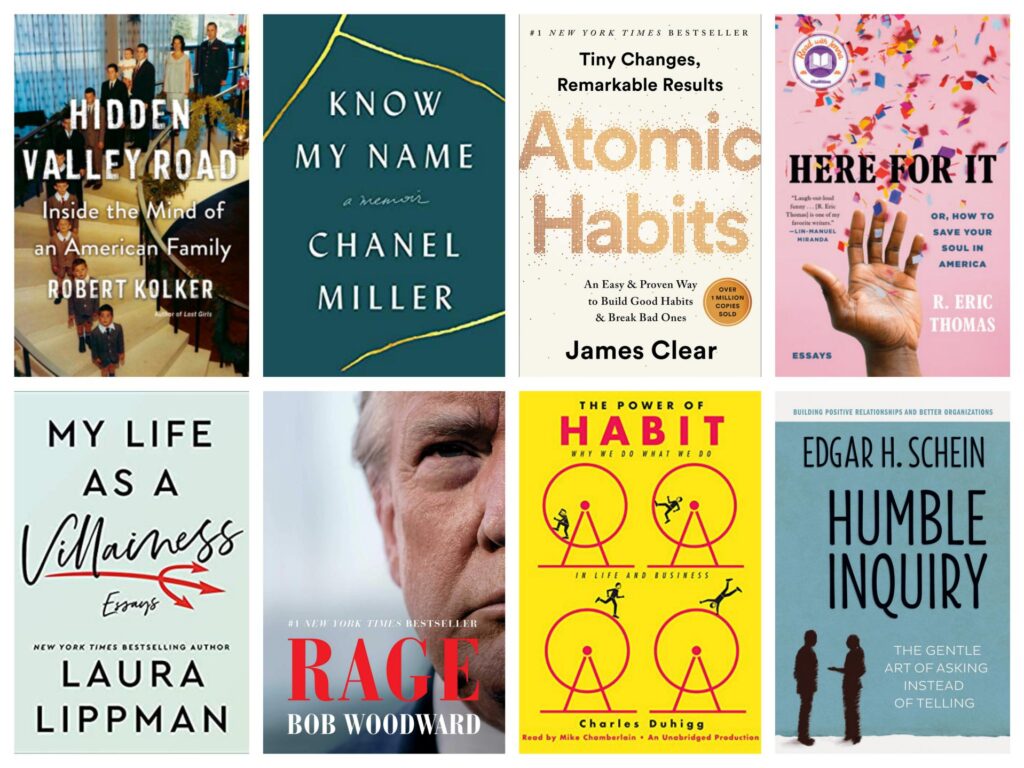 Up next: Must-read fiction.