While Mr. T and I toasted the New Year with bubbly, our poor pooch stayed home to nurse his wounds and figure out how to function with 10 less teeth. (Yes, I said 10.) On New Year’s eve eve, aka Brenda Lynn’s birthday, G suffered the great ignominy of having all of his top front teeth pulled (with the exception of the canines), plus some bottoms and a couple miscellaneous molars. The good news? Soft food only for a week. The bad news? Antibiotics, pain meds and a really goofy looking face.

After sucking up the $850 vet bill (don’t get me started), I decided to focus on my “investment” as the vet called it, and really enjoy our little fluff ball. At 12 and with some new dentistry, G has at least five more good years (I’m serious, he still acts like a puppy, even more so now that his teeth don’t ache!). Especially after the trauma of the teeth pulling and with my impending return trip to Cactus Land, I wanted to make sure that I was squeezing in all of the love possible.

Such a nice 48 hours that was.

A couple days post-vet, T and I returned home from a lovely family dinner at his cousin’s house. It was another huge holiday meal (seriously, we must STOP eating now people!), but the company was delightful. And more wonderful company awaited as my dear Shannon was staying with us for a few days. Imagine my horror when not five minutes after Shannon walks in the door, I hear T yelling from the front yard. Before I could make out what T was saying, I could smell it. The awful odor permeated the air and practically filled the house before I could get the door shut.

The damn dog got skunked.

Apparently this is a normal occurrence for some folks and I get that. It’s also not the worst thing in the world. But Goliath is an INDOOR dog. He spends approximately 5.7 minutes outside everyday doing his business. That’s it. There is NO reason why this mutt should be sprayed. But of course, animal instincts take over and he just HAD to chase the damn skunks down the middle of the road. (Don’t ask me why skunks were trotting down the lane in plain view either.)

And so T bought gallons of tomato juice (to no avail, mind you) and we gave Goliath the most colorful bath of his life (see below). The poor guy survived at least four tomato dips plus seven or so regular baths, and he still smelled like the wrong end of Pepe le Pew.

A few days later, with a clean bill of health, a slightly pink hue and much less of an odor, Goliath is right as rain. With some distance from the incident (and now that my hands don’t reek of stink), I can even find the humor. I’m particularly thankful that Shannon was around to capture the event for posterity. Now? I’d just like to enjoy my damn “investment” without any more drama. Here’s hoping that 2010 is less smelly and traumatic henceforth! 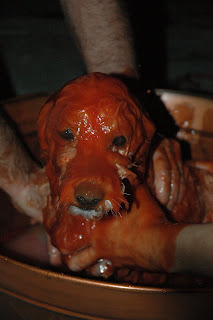 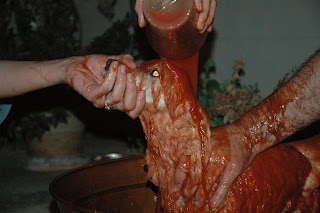 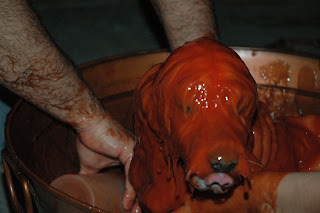 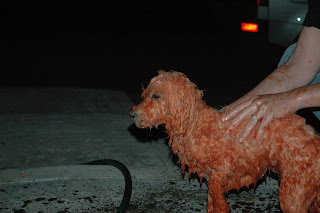 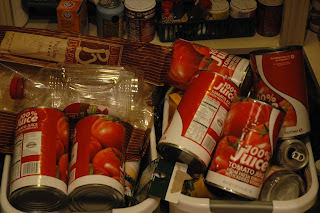