I went to church school growing up all the way through my bachelor’s. Now I work in a faith-based organization and study spirituality and religion for my doctoral program. I’m surrounded by religious commentary on Facebook and I see the effects of religion in world news. For this week’s Thursday Thirteen, I’ve got religious ruminations in mind and I’ll offer this caveat: These are my thoughts only and do not represent my employer or affiliated religious group. You may not agree with me. You may vehemently oppose me. But if you comment, please do so respectfully whether it’s in response to my drivel or to another person’s comment. Merci! 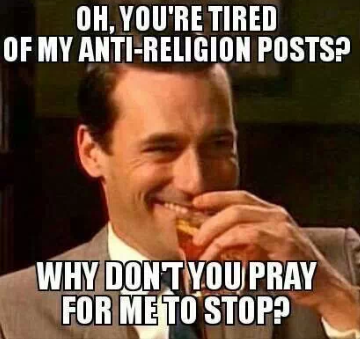 1. Separating religion and spirituality. Mostly, I study spirituality in organizations although religion often comes up in comparison. The people I’ve studied and spoken with most vociferously differentiate between religion and spirituality. As I define it in my research, spirituality can be most simply understood as a belief in an “Other.” God, god, the universe, mother nature, the great spirit, whatever moves you, just something supernatural and outside of yourself. Religion, on the other hand, is a (roughly) agreed upon belief system that defines a relationship to an Other–God, perhaps–with the requisite dogma, rules, norms, values, etc. I find that making that distinction allows others to articulate their thoughts on spirituality and religion much easier.

2. Putting god/God in a box. One of my frustrations with organized religion–all of them–is conceiving of god/God as so contained and rule-bound. When I hear of God described as the “all powerful, all knowing savior” but depicted in relation to constraining man-made rules about look, lifestyle, worldview, it’s boggling. Why bother, I wonder?

3. Dear heavenly mother…. Funny, I’ve never heard those words. In the Christian tradition of the trinity, I’ve often wondered where women are represented in the godhead. The Bible suggests that “God created man in his own image.” Now, I know we have another varietal in the gender department and I’m just wondering… is our Lord and savior sporting two sets? Is the holy spirit the female figure? Or, perhaps, is trying to name God’s sexuality one of them box things? Hmm.

5. Holy wars on Facebook. I’m sometimes amused, often appreciative and occasionally deeply saddened by the religious commentary I see on my friends’ Facebook pages. On the one hand, I think it’s remarkable that people have a public forum to profess their beliefs so widely. Good for those who feel comfortable! On the other hand, I see many instances of said professing making others uncomfortable or coming across as terribly saccharine and fake. Even worse? “Holy wars.” I’ve seen some pretty nasty comments back and forth, and I wish people could just agree to disagree.

6. Religion bashing. I’m sure some people reading this may see a negative spin towards religion. Sure. I’m not sure I completely buy organized religion for myself. BUT, I’m irked when people bash religion for bashing’s sake. To each their own as far as I’m concerned… believe what you like. Embrace the mystery and ritual of religion. Enjoy the community. Or don’t. Just don’t trash others’ religions because they aren’t your cup of tea.

7. Realizing churches are really just people. Most often when I hear religion bashing on a small level, it has more to do with the people in the church than the church itself. Granted, there are institutional-level issues afoot, but many of the complaints I hear are about the saints themselves and not the situation. How does that bumper sticker go? I’d like Christianity if it weren’t for the Christians? Churches are just people and I wish we wouldn’t hold entire religions accountable for the actions of individuals (unless, like our priest friends, the organization doesn’t take action on major problems. That’s a bit different I think!)

9. Chauvinism. On the list of majorly icky things, the chauvinism of many religions makes me irate. Granted, my perspective is decidedly western and rooted in Judeo-Christian traditions, but the fact that women can’t be ordained in most places and take a subservient role in general drives me ape. Too literal an interpretation of the “wives submit to your husbands” scripture is enough to make me yak.

10. Homophobia. This is one issue where I distinctly part ways from most religions. I can’t believe that the way people are born is a sin. Can’t do it. And I can’t stand the utter hatred I see directed toward my gay and lesbian friends, especially in relation to marriage and children. Nothing is sadder to me than a Christian contradicting all the positives of Christianity by spewing hate towards people simply for their lifestyle choices or the way they were BORN. Makes my heart hurt.

11. Slanted school curriculum. I’d never sat down to think about the biases introduced in church school curriculum until Penny Pantomime dished about her experience with slanted history, limited exposure to other viewpoints, etc. Thankfully, I felt my education both in high school and college was pretty neutral, religion classes aside. Still, the idea that there are institutions of learning that produce pointed propaganda and indoctrinate young minds is unsettling.

12. Socializing children. Awhile ago, I was talking to my friend about a horrific dining experience that was punctuated by the hellions of a couple sitting in the booth behind me. Jumping, screaming, hitting, hollering, these brats were the best birth control you can imagine. And for some reason it got me thinking: How did I learn to interact with non-family adults when I was their age? Church. Church was where I learned to be quiet. Sit still. Navigate casual relationships with others. Perform ceremonies. Follow directions, à la sit, stand, sing, pray, etc. Eat in a civilized manner. Share. Take responsibility. I’d never thought of church as a mechanism for teaching children in such a way and I think: pretty cool. It’s no wonder so many of my friends go back to church once the mini-mes arrive.

13. Connections. I refer to it as “the Adventist bubble,” and the strong social network within my affiliated religion is a great example of the connections that religions forge between people. Jobs, schools, favors, food, referrals, information, family, relationships… religions have a unique ability to create support nets for members, which I admire. Granted, there are negatives to the bubble-like atmosphere, some nepotism/incesty type stuff, but some of the coolest stories I hear from churches involve members taking care of each other.