So I forgot to post this yesterday, September 2, just roll with it. 😉

I’ve been waiting for the right time to introduce my new roommate*, Matt, and I figured today–HIS BIRTHDAY!–is as good a time as any. So, for this Thursday 13, I give you: Things I know about Matt Savage/being a roommate.

1. I picked a good one. Matt is a very sweet character who is tidy, thoughtful, and makes me laugh. A lot. He does voices/accents, and lately many of our conversations have taken place with him using a Southern drawl. (He attempts Vampire Bill but it usually sounds like Scarlett** O’Hara. ha!) 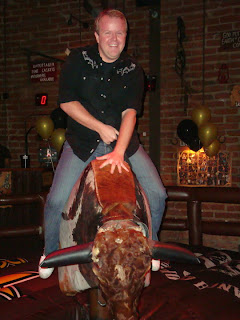 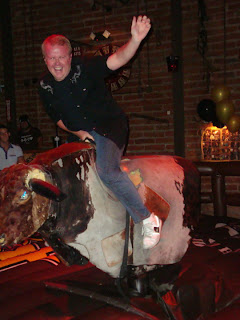 Last week Matt organized a birthday dinner for his friend Mike who is in our program at ASU. Following some joke from orientation, they all rode a mechanical bull. I’m *so* sad I missed that dinner if only because seeing Matt riding the bull live in person would have filled my funny bank for weeks.

3. Living together is a cultural experience. Despite the rosy Irish-looking complexion, Matt is a Hawaii-native. As such, we take our shoes off religiously, say Aloha (well, he does anyway!), and I’m learning bits and pieces of Hawaiian here and there. It’s pretty cool to learn about new customs and languages! P/S Hawaiian is so much easier to pronounce than French! (This is coming from someone who has trouble with the Rs)

4. Being a roommate may make me a better wife. At least on the tidiness front. I have been SO good lately! For the last three weeks (hey, I could have said “days”), I’ve kept my bathroom spotless, not left my shoes everywhere, and have done the dishes like every other day instead of leaving them in the sink. Mr. T approves (and desperately wishes the behaviors don’t disappear at home!)

5. We’re saving the environment. Or saving on parking fees, whatever way you want to view it. Carpooling rocks!

6. I may finish the 8 pounds of spaghetti I bought last October. Because Costco is my favorite store, I still continued to buy staples there last school year. Happily, I now have another person to share the burden of using up massive amounts of cereal, pasta, TP, etc.

7. I’m less lonely. Now, as dear as my roommate is, he’s no Mr. T. BUT, I’m a lot less lonesome than I was last year. It’s nice to share dinner or watch random episodes of reality TV with someone other than myself!

8. Speaking of, we have TV! Not that I watch it at all during school–really, all I saw last year was Glee and past episodes of Grey’s Anatomy–but it’s nice to have. I know that sounds weird, but some days, I just want the noise and the veg-out ability. Yay Matt for buying a big TV this summer.

9. Angels. Not only is Matt an award-winning scholar with oodles of experience to share with me (he’s a third year in my program), he explains stats/quant problems to me without censure. He does laugh at my “qualitative” issues though. It is helpful to have someone to ask questions of and learn from, right at home! He’s also a major over achiever on the leadership front and was my inspiration to run for our student association’s vice president position. (More on that later!)

10. Devils. He’s also a major social butterfly though and he’s always trying to get me to go out! Well, *always* might be an overstatement considering I’ve declined and holed up in my room for the last six days straight. (I had a paper due, okay??) While he is a good example in the school department, I think I’ll be fighting for study time on occasion.

11. Resolving culinary differences. I love pasta, he loves rice. I’m over the mood for cheddar, he hearts pepper jack. Marinara calls to my soul, he’s a cream-based sauce man, all the way. I like my (crack) coffee rich, black, and barely sweetened. He drinks the cinnamon flavored nonsense, doused in creamer and sugar. It’s weird to share a kitchen with someone who doesn’t like my staples. I got so used to the basic culinary harmony of me & Mr. T, I forgot that people *might* not like my favorites.

12. Celebrating our similarities. We agree on a few things though: coffee ice cream, Orowheat’s oat nut bread, manicured toes, Costco tortillas, Iz Kamakawiwo’ole, Corollas and avocados. Oh, and we both like boys which is helpful.

13. Making good friends. Referencing #10 and his social butterfly status, I’m happy to be expanding my social circle by getting to know Matt’s friends better. Yay for roommate social networking.

* Yes, I got a husband AND a roommate this summer. More on that later.
** This will be the test to see if he actually reads my blog. I’m guessing not.