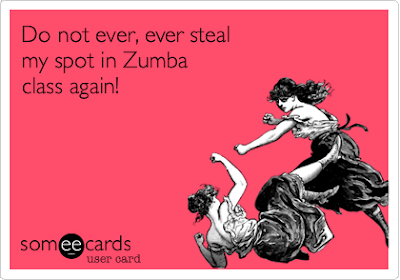 I moseyed into morning Zumba class, hitting a wall of stagnant sweaty air from the previous class (ick). As I parked myself in the far left corner of the room, a wide empty space where the mirrors come together, I saw a bouffant-esque blond mop coming toward me. The painted lips underneath the pile of hair said “I saw you in the other class. Can you move back there?” as she pointed behind us.

For a moment, her words did not compute. Yes, I saw you last week. So? Why am I moving back? Did you really just ask me that?

And then I realized, as I outlined in my “Fitness Class Characters” post a couple weeks ago, I’d run into #7, Ms. Territorial. And Ms. Territorial was claiming “her” space.

Without thinking, I stepped backwards, contemplated moving across the room, and started to seethe. I watched as the blond mop bounced in time, along with her three friends (remember what I said about The Besties?), taking up the space of five or six people.

Now, I happen to research emotions in organizations, and I’ve been intrigued by theories of emotion management and regulation. (Not where you thought this post was going, huh?) One theory talks about emotional suppression… When we encounter a surprising stimulus, especially one that’s negative–in this case, someone having the nerve to ask a stranger to move out of “her” spot–we might bury or suppress those feelings as I did when, without a word, I moved back. Instead of articulating my irritation/surprise, I swallowed the feelings. As the theory goes, this suppression may have adverse consequences. By not expressing the negative emotion, I’m likely to experience it even more forcefully and have a harder time snapping out of it.

Even knowing this emotional suppression stuff, I wallowed a bit, not letting go and getting into the rhythm of the class as I might normally. I couldn’t help but think about the interaction. Was it really that big of a deal? No. Was my spot a few feet back any worse? No, not really. Partly, I was dwelling on the equity aspect–folks should be able to stand where they want, yes? There are no “designated spots,” dammit. Mostly though, I cued into the clique-ishness* of the gesture. The Besties wanted to rule the roost their way, without outsiders, without sharing. (Waa!)

This point came home to me in a surprising way after the class ended. Blondie’s friend walked up to me as I gathered my things and asked if I was a dancer (once upon a time, yes). She complimented me on my Zumba moves and told me that she really liked dancing next to me. We chatted a bit and I walked out of class smiling a bit. And I thought, wow, how different would the class have been for me today if I felt included rather than shunned? What if this corner of the fitness class created a sense of community instead of clique-ishness? I wonder.

So, instead of being Ms. Passive Aggressive and moving to the other side of the room next week (and glaring, of course), or worse, not going to that class again ever (I admit, I thought of that, but who does that hurt? Me!), I’ll go again. I’ll be prepared**. I’ll kill the Besties with kindness. And I will damn well keep being nice to the people around me and help build the community I want to see. Who knows, maybe I’ll develop some fitness class friendsies of my own?

Have you had any run-ins with fitness class characters?

* The researcher in me did start designing a study to investigate whether this insider-outsider business impacts people’s fitness goals. It’s likely easier to commit to a class and to a fitness goal with social support, yes?
** Another emotion regulation strategy, the converse to emotional suppression is cognitive reappraisal… Preparing in advance for a potentially emotional situation e.g. Thinking about it, putting the feelings in perspective, etc.