“Tell me something good,” I said, curled up next to Mr. T on the couch after dinner last week.

This set off a discussion about how I desperately wanted Cold Stone but couldn’t have it thanks to my Christmas tree wager. In August I (foolishly) gambled that I could lose 13 pounds by December 1. If I win, I get a long-coveted Vitamix. If I lose, no Christmas tree. (No. Christmas. Tree.)

Devilishly, T suggested, “Well, you could give up Christmas and just eat whatever you want right now.” 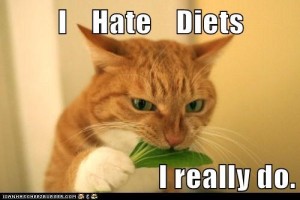 After I expressed my outrage, he inquired about how things were going.

“I threw away the tortillas and poured soap* on them so I wouldn’t be tempted to take them out of the trash and make more quesadillas,” I admitted.

Up until two weeks ago, I’d been riding high. At that point, I’d shed seven pounds and would simply have had to maintain my oh-so-reasonable-sounding pound-a-week weight loss goal. And then I won an online “Biggest Loser” contest and decided to, erm, celebrate. The deep dish celebration set off a chain of cheat days that resulted in feelings of desperation and the realization that I would need to lose more than 1.3 pounds a week to meet my deadline. And it would have to happen with a paella cook-off, a long conference, and Thanksgiving(s) in between.

At that point I started to keenly regret making my goal so pound-specific. Had I been smarter, I would have said “Fit into my regular pants,” which was the entire goal in the first place. I started to think of arguments to bargain with T. Maybe, if I fit into the pants, I could give up the Vitamix and keep the tree?

No, instead I went the crazy route. I found the “Eat Your Heart Out” week long cleanse/diet on Pinterest that promises people lose “10 pounds in a week!!” You would think I would have learned from the Pinterest-inspired freezer meal debacle, but no.

I started the cleanse yesterday. Day one is all fruits and I don’t know how, but I survived. Even after T ate leftover cheesy pasta casserole in my presence. Stay tuned for a full report later this week. Working title: Hangry Italians should never do cleanses.

And yes, if I some how magically make the goal early, you better believe Christmas is going up immediately.

* Yep. Just like Miranda and her chocolate cake from Sex and the City.

P/S In case you wonder how I’m feeling:

PP/S Yes, after this week, it’s back to regular healthy eating.

NaBloPoMo posts:
The best laid plans
I just realized how much I miss Google Reader