I dropped the F-bomb in class this week. No, not the one that autocorrect turns into ‘duck,’ but ‘feminism.’

I started the lesson with some trepidation. Talking feminism and historical gender inequity is sometimes difficult for college students. In fact, just last year I wrote about how students regularly give me push back about the word feminism. However, far from being uncomfortable with the term and concept, the students in both my organizational communication courses were embracing of it. 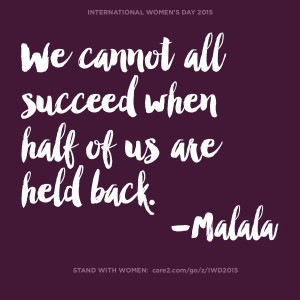 We watched the trailers for the documentaries, MissRepresentation and The Mask You Live In, and they actively discussed gender stereotypes they face and challenge every day. We viewed Sheryl Sandberg’s TED talk “Why we have too few women leaders” and contemplated the relationships between representation, power, leadership, and societal discourses about masculinity and femininity.

I left so impressed at my students’ willingness to discuss a difficult topic, and heartened at their suggestions for making the world a better, more equitable place. But I couldn’t completely hide my cynicism at how long the process is taking. And how frustrated I feel at the lack of women in politics, in leadership positions, in media.

And then I woke up and saw that Justin Trudeau, Canada’s new prime minister, appointed a cabinet with an equal amount of men and women. Equal. Not a token woman or two. An equal amount. My mind can’t even fathom it. When asked why, Trudeau said, “Because it’s 2015.”

P/S For a riveting read on Trudeau’s decision, including links to important research about how increasing women’s participation in organizations, even through quotas, improves business and community outcomes, read professor Andre Spicer’s article “Justin Trudeau is right, and how about quota for women?”