Starbucks launched the red cups and Target now drips with tinsel and lights. If you want a fast read to cut through the overwhelming sweetness of the apparently-already-here holiday season, look no further than Jessica Knoll’s Luckiest Girl Alive. Just make sure you have a strong stomach and tolerance for suspense. 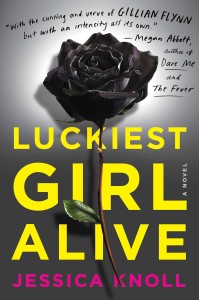 The book’s narrator and protagonist is Ani FaNelli, a writer at a powerful women’s magazine in New York. Her story weaves together Sex and the City-sharp reflections on the life and times of women in New York, Devil Wears Prada-ish tales of her work at the magazine, and running commentary on upper crust wedding planning. Juxtaposed against these story lines, which run the gamut from anthropological to vapid, are snapshots from her high school years.

We know Ani had a rocky time in high school, struggling to fit in, especially after being transferred from her all girls Catholic school to the prestigious Bradley School. It soon becomes clear that something happened there, something that warrants her upcoming participation in a documentary.

As the story builds towards the documentary, she reflects with disdain about her “bourgey” upbringing and the pains she’s taken to rid herself of any lingering stigma, from swapping fashion to changing her name from the given TifAni to Ani, and of course, being engaged to old moneyed Luke Harrison. She seems hell bent on transforming herself before the cameras roll.

With exquisite precision, Knoll reveals Ani’s traumas and triumphs, most of which revolve around fitting in and finding her place. Throughout the story, you’re not sure whether to root for her, fear for her, or smack her.

But I will say, by the end of the novel, I did clap for her.

What I loved about the book: It’s a fast moving story, but a complex read. Knoll’s writing is clever and breathtakingly emotional, and I found myself re-reading passages and appreciating her craft. Ani is a difficult character–not really likable as an adult or teen, but there’s something about her transformation, even as it emerges throughout the story, that commands respect. I couldn’t resist Knoll’s plot twists and surprises dropped deftly throughout the text. I just had to know what the hell happened at that school. After finding out, I have to warn, it’s not for the faint of heart. But it makes me appreciate how the story unfolded all the more.

Bottom line: If you liked Gillian Flynn’s Gone Girl or Paula Hawkins’ The Girl on the Train, you’ll probably like this one, too.

Other bookish things:
The Witch’s Daughter: Because who doesn’t love a time traveling witch?
The Circle: Because 1984 wasn’t scary enough
Conquering fears. Thank you sparkly vampires.
If I should die tomorrow
Applying “The Power of Habit”
The Chosen: A story of friendship and faiths
How not to go broke with an e-reader, aka why I heart the public library
Memoirs of an addicted brain: On drugs, emotions, and “corrupted learning”

One Response to "Luckiest Girl Alive: An emotional thriller"